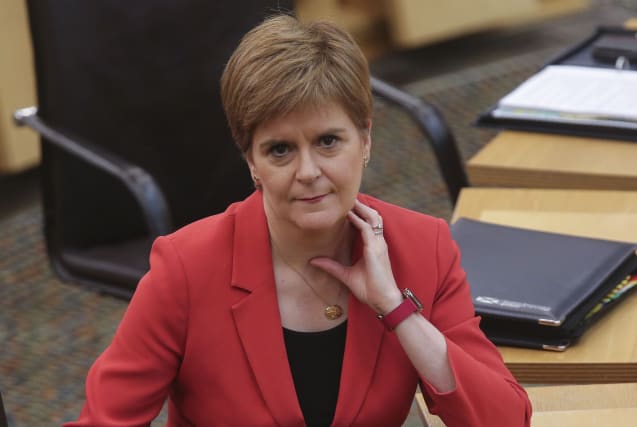 The First Minister said the limit applies both inside – in houses and hospitality venues – and outside, including in private gardens.

Speaking during First Minister’s Questions on Thursday, Ms Sturgeon said the regulations giving legal effect to the limit will come into force on Monday but people should comply with them immediately.

She said there will be some limited exceptions, including organised sports and places of worship, and children under 12 will not count towards the limit.

Previously, people could meet in groups of up to eight from three households indoors and 15 from five households outdoors.

The limit of 20 people for funerals, weddings and civil partnerships will remain and will also apply to wakes and receptions.

The First Minister made the announcement during the latest review of lockdown restrictions in Scotland.

It follows Prime Minister Boris Johnson announcing people in England “must not meet socially in groups of more than six” from Monday.

Ms Sturgeon confirmed it is “not possible at this stage” for Scotland to move from phase three of plans to leave lockdown to phase four.

She said this is “likely to be the case for some time yet” as the latest estimates show the R number in Scotland – the average number of people infected by each person with the virus – could be as high as 1.5.

The First Minister said: “So rather than the threat to public health receding, the pandemic is at this stage accelerating again – albeit, and thankfully, from a low base and not as rapidly as it was back in March and April.”

Ms Sturgeon announced reopenings she had previously indicated could take place from September 14 will have to be put on hold for a further three weeks as they would risk further spread of the virus.

She said the decision “means unfortunately spectators will not be able to return to sports stadia and other venues over the next three weeks”, with a new indicative date given of October 5.

Ms Sturgeon said given the rise in Covid-19 cases – which increased by 161 in the past 24 hours to 22,039 – putting these moves back is “the only responsible decision we can reach”.

She added the reopening of call centres and offices where staff are still working from home will “definitely not take place” before October 1 – when this will be reviewed.

“For now, working from home will remain the default position,” she told MSPs.

In her update on coronavirus figures, the First Minister said no more deaths of confirmed patients have been recorded in the past 24 hours and this toll remains at 2,499.

Of the new cases, provisional figures indicate 65 are in Greater Glasgow and Clyde, 46 in Lanarkshire and 12 in Lothian.

There are 266 people in hospital confirmed to have the virus, a fall of eight in 24 hours.

Of these patients, seven were in intensive care, up by one.