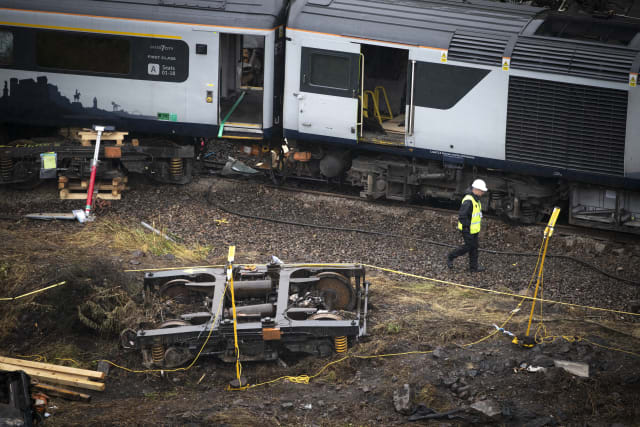 Network Rail cannot afford to strengthen all “substandard” trackside slopes, despite the fatal Stonehaven crash, it has admitted.

In an interim report into the derailment which killed three people, the Government-owned company said it is improving the management of its infrastructure but “we expect there will still be earthwork failures as a result of challenging weather”.

“Many failures” will be prevented and areas with “the highest risk of failure and consequence” are targeted for action, Network Rail insisted.

It added: “It is simply not economically viable to strengthen all sub-standard infrastructure slopes.”

It is also investigating the use of technology and data to enable it to make better decisions about where action is most urgently required.

The Department for Transport, which commissioned the report, said that from 2019-2024 Network Rail is investing £1.3 billion in strengthening the railway’s resilience to extreme weather.

Network Rail said the train hit a pile of “washed-out rock and gravel before derailing”.

It has since conducted 584 inspections of sites which share some of the characteristics of the location of the Stonehaven crash, including with the help of helicopter surveys.

No significant issues “requiring emergency intervention” were found, although defects that have “deteriorated and require action sooner than originally planned” were identified at “around 1% of the sites”.

Network Rail has introduced emergency changes to the way signallers should act during severe weather or reports of unstable ground.

Signallers must stop all trains on affected lines until an inspection has been carried out by “a competent engineer”.

They are also being told to report all conditions to the relevant operations control centre and act upon the instructions received.

This comes after a preliminary report into the Stonehaven crash by the Rail Accident Investigation Branch (RAIB) found that following reports of a landslip, the signaller cleared the train to travel back in the direction it had come from.

After reaching speeds of 73mph it struck a different landslip and derailed.

Transport Secretary Grant Shapps said: “The independent investigation will enable us to understand exactly what went wrong, and make sure it does not happen again.

“We cannot delay learning the lessons. That is why I immediately commissioned this report and am making the interim findings available.

“I welcome the work setting out the challenges in adapting our rail infrastructure to cope with increasing extreme weather events caused by climate change. The task is now to overcome those challenges.”

Network Rail chief executive Andrew Haines said: “We are all aware that we are increasingly seeing more incidents of severe weather and, as the report published today shows, earthworks and drainage infrastructure, some of which are more than 150 years old, prove to be a real challenge as the country experiences more heavy rainfall and flooding.

“We are improving and accelerating our resilience work and will do everything we can to minimise the impact of weather on the safety and reliability of the railway as our climate continues to change.”

Mr Shapps is writing to the Chief Constable of Police Scotland, Iain Thomas Livingstone, to recommend that Pc Liam Mercer, one of the first officers on the scene at Stonehaven, is commended for his bravery.

The first of the derailed carriages is expected to be removed from the site on Thursday.