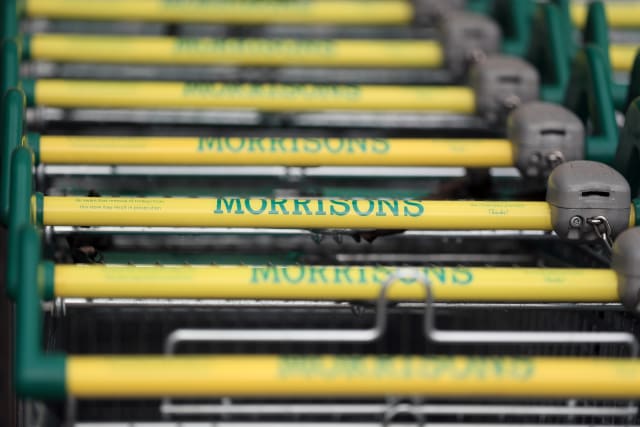 Supermarket Morrisons has led declines on London’s blue chip share index and sparked falls among its grocery rivals after revealing a heavy hit from the pandemic.

The Bradford-based retailer saw shares drop 5% after results showing it booked £155 million in costs related to the crisis, which knocked profits despite surging grocery sales.

The wider FTSE 100 Index closed 9.5 points lower at 6003.3, losing nearly all of its early session gains as the Dow Jones Industrial Average on Wall Street also struggled to make headway.

The European Central Bank (ECB) did little to boost investor spirits, despite holding rates as expected and predicting the eurozone would contract by a better-than-first-thought 8% this year.

The Dow was around 30 points lower around the time London closed, while across Europe the Dax in Germany finished 0.2% lower and France’s Cac 40 was 0.4% down.

It was yet another bad day for the pound, which fell to new six-and-a-half-week lows against the dollar as no-deal Brexit fears ramped up.

Among stocks, it was the supermarket sector’s turn to suffer a shares beating, after the latest figures from Morrisons.

David Madden, market analyst at CMC Markets, said: “The pandemic has proved to be a double-edged sword for most retailers that stayed open during the crisis, because health and safety overheads jumped.”

But it was a better session for electricals retailers Dixons Carphone, which saw shares surge 7% after it revealed online sales more than tripled while stores were closed, and have continued to trade at twice last year’s levels since high streets reopened.

Airlines were once again at the front of investors’ minds, with British Airways owner IAG the latest to announce capacity cuts in the face of an ever-expanding quarantine list of countries.

It also launched its a 2.75 billion euro (£2.5 billion) rights issue to help shore up its finances and weather the coronavirus crisis.

Budget rival easyJet broke its losing streak despite the IAG capacity cut news, gaining 1% or 7.6p to 592.4p in the FTSE 250.