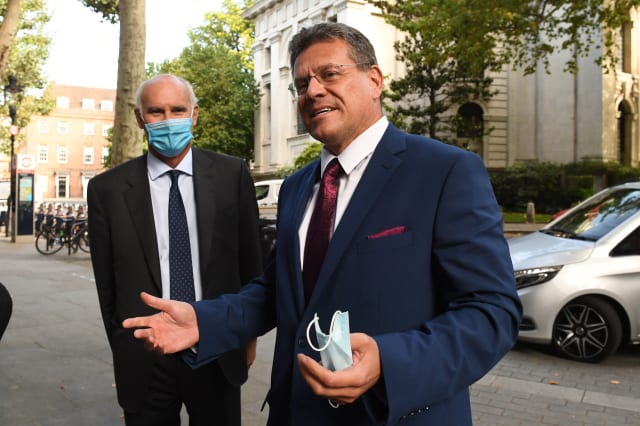 The EU has expressed “serious concerns” over Prime Minister Boris Johnson’s move to override part of the Brexit divorce deal, ahead of emergency talks with the UK.

European Commission vice president Maros Sefcovic said he will listen to what Cabinet Office minister Michael Gove has to say during an “extraordinary meeting” on Thursday, before deciding whether Britain can still be trusted.

The hastily arranged meeting of the UK-EU joint committee in London was arranged after the Government tabled legislation to alter key elements of the Withdrawal Agreement that Mr Johnson signed with Brussels.

The Government infuriated Brussels just as trade deal negotiations reached a crunch week, when ministers admitted they could break international law over the deal.

Mr Sefcovic, arriving at St Pancras, told reporters: “I came here to express the serious concerns that the European Union has over the proposed Bill. So that will be the nature of our discussions today.”

Asked if he has lost trust in the UK Government, Mr Sefcovic replied: “Let’s hear what Michael Gove will tell me this afternoon.”

Meanwhile, EU chief negotiator Michel Barnier and his counterpart from Downing Street, Lord Frost, will meet for the final day in the eighth round of trade deal negotiations.

Mr Johnson has argued that the UK Internal Markets Bill tabled this week is necessary to preserve unfettered trade within the UK and prevent a border between Britain and Northern Ireland.

But he has dismayed Brussels by threatening to breach international law.

Irish Taoiseach Micheal Martin called the Prime Minister to express his concerns, including “the breach of an international treaty, the absence of bilateral engagement and the serious implications for Northern Ireland”.

The move has also angered some in the US, where Nancy Pelosi, the speaker of the House of Representatives, said there is “absolutely no chance” of Congress passing a trade deal with the UK if it threatens the Northern Ireland peace process.

“Whatever form it takes, Brexit cannot be allowed to imperil the Good Friday Agreement, including the stability brought by the invisible and frictionless border between the Irish Republic and Northern Ireland,” Ms Pelosi said.

“If the UK violates that international treaty and Brexit undermines the Good Friday accord, there will be absolutely no chance of a US-UK trade agreement passing the Congress.”

Ministers argue the new proposed legislation is necessary to protect the Northern Ireland peace process if London and Brussels are unable to agree a free trade deal before the current Brexit transition period runs out at the end of the year.

“For generations, Britain’s word, solemnly given, has been accepted by friend and foe. Our signature on any treaty or agreement has been sacrosanct,” he said.

“Over the last century, as our military strength has dwindled, our word has retained its power.  If we lose our reputation for honouring the promises we make, we will have lost something beyond price that may never be regained.”

He said: “If you fail to get a deal, Prime Minister, you own that failure.”