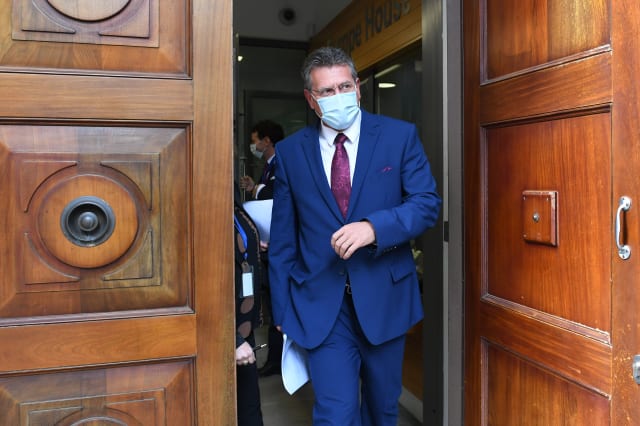 The EU has demanded that the Government withdraws measures that override Boris Johnson's Brexit deal from new legislation by the end of the month or risk jeopardising trade negotiations.

European Commission vice president Maros Sefcovic said Britain had "seriously damaged trust" with Brussels with the Bill that deviates from the Withdrawal Agreement signed by the Prime Minister.

In an emergency meeting in London, he told Cabinet Office minister Michael Gove that the EU does not accept the legislation is needed to protect the peace process in Northern Ireland.

And he warned that Brussels is "of the view that it does the opposite" in a statement released after the "extraordinary meeting" of the joint committee between the two sides.

He said "in no uncertain terms" that the "timely and full implementation" of the divorce deal is "a legal obligation", according to the statement.

"Violating the terms of the Withdrawal Agreement would break international law, undermine trust and put at risk the ongoing future relationship negotiations," it added.

He called on the Government to remove measures relating to state aid and the Withdrawal Agreement from the draft Bill "in the shortest time possible and in any case by the end of the month".

He stated that by putting forward this Bill, the UK has seriously damaged trust between the EU and the UK.

"It is now up to the UK Government to re-establish that trust," the statement said.