Eligibility checks and priority system for tests being looked at, says Hancock 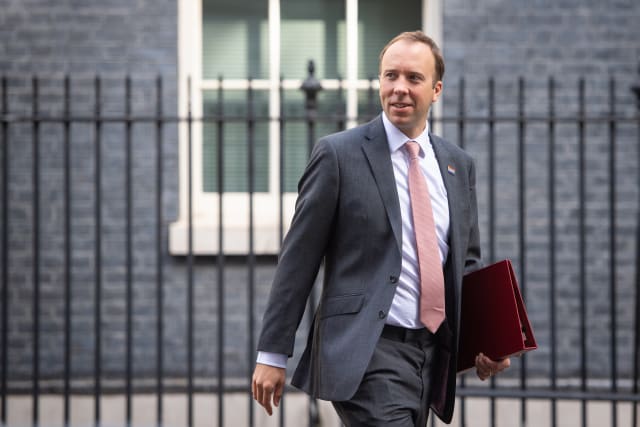 People hoping for a Covid-19 test could face “eligibility checks” and be subject to an order of priority system, the Health Secretary has said.

Matt Hancock told MPs the measures were under consideration following a “very sharp rise” in the last fortnight of people “coming forward for tests when they’re not eligible”.

MPs raised concerns over test shortages in their areas and people having to travel several miles in a bid to get one, with Tory former minister Greg Clark calling on the Health Secretary to get a “grip” of the testing situation.

Mr Hancock was also heckled by some opposition MPs as he outlined his ambitions for Operation Moonshot, which will aim to provide mass testing using saliva and other methods which can deliver results within 20 to 90 minutes.

He aimed a message at the “naysayers” doubting the idea, although later did not deny reports the project could cost £100 billion when pressed by Labour.

Speaking in the Commons, Labour former minister Maria Eagle said people with Covid-19 symptoms from her Garston and Halewood constituency have been advised to travel to Oldham, Manchester, or north Wales despite there being a nearby testing facility at Liverpool Airport.

Mr Hancock replied: “There’s record testing capacity and most people get tested close to home, however, we have got this challenge that some people without symptoms who are not eligible for a test have been coming forward.

“Thus far I have been reluctant to put a barrier and a strong eligibility check on the front of the testing system because I want people with symptoms to be able to get tests as fast and as easily as possible.

“However, with this very sharp rise we’ve seen in the last couple of weeks of people coming forward for tests when they’re not eligible, that is something we’re having to look at.”

Conservative Laura Farris (Newbury) said the “successful” return of schools in West Berkshire has been “matched with a reduction in the availability of testing”.

She added: “If there is a reluctance to impose more stringent eligibility criteria, would he consider an order of priority based on, for example, working parents, teachers being able to access tests sooner?”

Mr Hancock replied: “She makes a very good point about the prioritisation, and the question is how to enforce a prioritisation without putting in place barriers that slow down access to tests for people that need them – and that’s something we’re looking at now.”

Mr Clark, Tory chairman of the Science and Technology Select Committee, said: “The Secretary of State must accept that there is a problem here. Constituents of mine in Kent this week displaying symptoms were advised to go for tests to Bude in Cornwall and Galashiels in Scotland.

“This is in a mild September before the autumn and winter when people have coughs and colds that may look like symptoms of Covid.

“And it is no good blaming people who are asymptomatic – I’d be interested to see if the Secretary of State could say what percentage of people are turning up for testing that don’t have symptoms.

“I think this needs his personal grip. He referred to the need for him to increase testing capacity from 1,000 a day to 100,000 a day.

“This is an urgent matter, it needs a grip before the autumn bites, the autumn/winter bites. Will he commit by the end of the month to make sure anyone who has symptoms of Covid can get a test at a reasonable place, convenient to their home?”

Mr Hancock said ensuring everyone with symptoms can get a test close to their home “is of course my goal”.

For Labour, shadow health secretary Jon Ashworth earlier pressed the Health Secretary over how much money has been allocated to “Project Moonshot”.

He said: “According to the British Medical Journal, leaked documents suggest the cost will be £100 billion. Is this correct?

“If it’s not correct, can (Mr Hancock) tell us what his estimate is of the cost of processing 10 million tests a day and can he tell us how much has been allocated to Project Moonshot?”

Mr Hancock responded: “£500 million has thus far been allocated to this project but it’s likely that there will be more.”