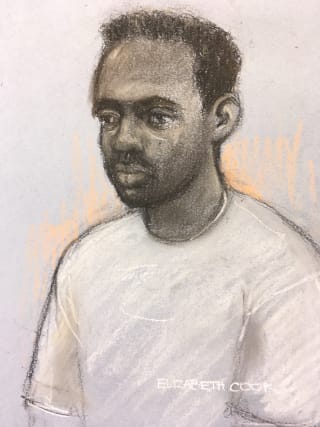 A man accused of murdering a university worker and attempting to kill seven other people in a series of knife attacks in Birmingham city centre on Sunday has appeared before a Crown Court judge.

Birmingham-born McLeod is accused of stabbing to death 23-year-old Jacob Billington, a Sheffield Hallam University graduate intern and drummer, and attempting to kill seven other people in a series of attacks spanning 90 minutes.

It is alleged the 27-year-old defendant did not remain in the city centre throughout the hour-and-a-half period, during which five separate incidents unfolded.

West Midlands Police had previously been criticised for alleged delays in responding to the attacks, which the force’s chief constable condemned as “ill-informed critique”.

Three people were initially knifed, beginning in Constitution Hill at 12.30am, before attacks were reported in Livery Street and nearby Barwick Street over the next 20 minutes.

Five other people were then stabbed, including Mr Billington, from Crosby, Merseyside, in attacks in both Irving Street and Hurst Street between about 1.50am and 2am.

Police declared a major incident after Mr Billington, a drummer in a band named The Vedetts, was killed and others wounded, including his old school friend and band-mate Michael Callaghan.

Mr Billington was among a group who were making their way back to their hotel after enjoying a night out while visiting a friend who is studying in the city.

A post-mortem examination concluded he died from a stab wound to the neck.

NHS worker and engineering graduate Mr Callaghan, also 23, was also stabbed in the neck during the attack in Irving Street and remains in a critical condition.

A 22-year-old woman who was knifed four times in the neck in nearby Hurst Street is described as critical but stable.

Another man, Thomas Glassey, who suffered two stab wounds in Barwick Street, is in a serious condition but understood to be recovering.

McLeod, who spoke only to confirm his name and that he could hear the proceedings during the 25-minute hearing, wore a yellow and green jumpsuit for the court appearance.

At times, he could be seen rubbing his temples with both hands, touching his wrist and screwing his eyes closed.

The Recorder of Birmingham, Judge Melbourne Inman QC, remanded McLeod into custody for a further hearing at Birmingham Crown Court next month and set a three-week provisional trial date for February 22 2021.