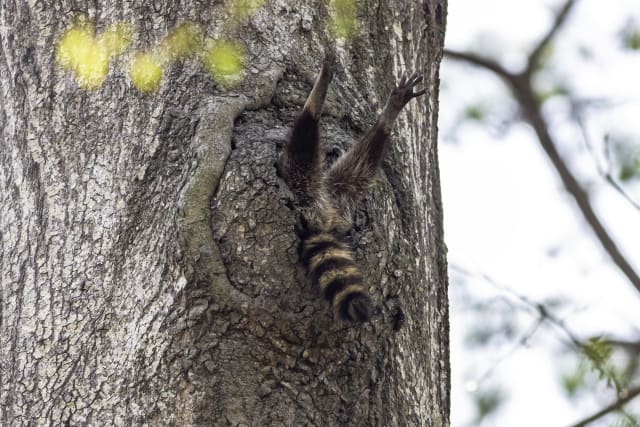 A faceplanting elephant, a smiley fish and a raccoon in difficulty are among the animals featured in the final of this year’s Comedy Wildlife Photography Awards.

A poorly penguin and an uninhibited baboon are also among the 44 images shortlisted in the competition, a global contest that aims to showcase “seriously funny images of the earth’s most amazing wildlife”.

The competition, which is free to enter, was founded by photographers and conservationists Paul Joynson-Hicks and Tom Sullam, and is run in partnership with the Born Free Foundation.

Among the eye-catching entries are a raccoon seemingly stuck in a hole in a tree, taken by Charlie Davidson, a colourful parrotfish which appears to have a big grin on its face, as shot by Arthur Telle Thiemenn, and Tim Hearn’s image of a faceplanting elephant.

The winner will be decided by a panel of judges including TV presenter Kate Humble and comedian Hugh Dennis.

There is also a people’s choice award, on which members of the public can vote via the competition’s website.

The winners will be announced on October 22, with the top photographer claiming a trophy and a week’s safari in Tanzania.