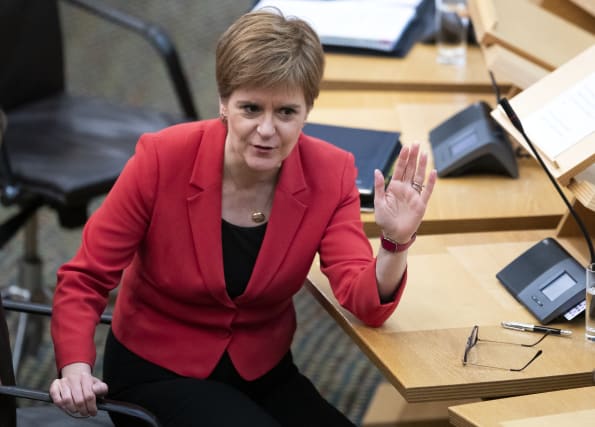 New legislation setting out trading arrangements within the UK after the Brexit transition period has been branded a “full frontal assault on devolution” by Nicola Sturgeon.

The Scottish First Minister spoke out against proposals in the UK Government’s Internal Market Bill – saying ministers in Wales had also voiced their concerns about it “stealing” powers from the devolved governments.

She spoke out as UK Government minsters insisted the new Bill would provide extra powers for the devolved governments in Scotland, Wales and Northern Ireland.

Scottish Secretary Alister Jack also insisted that without it, jobs north of the border would be under “serious risk”.

From January 1, when the UK’s transition period as it leaves the European Union comes to an end, powers will be returned from Brussels to the administrations in Scotland, Wales and Northern Ireland, the UK Government has stated.

But Ms Sturgeon insisted: “The Internal Market Bill that the UK Government will publish today is a full frontal assault on devolution.”

She tweeted: “At forthcoming @ScotParl elections, @theSNP will make case for independence. And more and more this is not about independence v the status quo of devolution. It’s about independence as the only way to protect the Scottish Parliament from being undermined and its powers eroded.

“And added to all of the above, this is a Bill that, by the government’s own admission, breaks international law. This UK gov is the most reckless (& to make it worse, incompetently so) and unprincipled in my lifetime. Scotland can do better and we will have that choice.”.

Scottish Constitution Secretary Mike Russell has already vowed the Scottish Government will not consent to the Bill – which is due to be published at Westminster on Wednesday.

He insisted that Scottish ministers “couldn’t recommend consent to a Bill that undermines devolution and the Scottish Parliament, and which, by the UK Government’s own admission, is going to break international law”.

Mr Russell said: “This is a shabby blueprint that will open the door to bad trade deals and unleashes an assault on devolution the like we have not experienced since the Scottish Parliament was established.

“We cannot, and will not, allow that to happen.

“It will open the door to a race to the bottom on food standards, environmental standards and will endanger key public health policies such as minimum unit pricing.

“It will also deliver a hammer blow to the Scottish economy by making it harder for the UK Government to conclude free trade agreements if other countries think the UK won’t meet its obligations.”

But UK Business Secretary Alok Sharma said the legislation would protect the UK’s “highly integrated market” by “guaranteeing that companies can continue to trade unhindered in every part of the UK after the transition period ends and EU law falls away”.

He added: “Without these necessary reforms, the way we trade goods and services between the home nations could be seriously impacted, harming the way we do business within our own borders.

“Now is not the time to create uncertainty for business with new barriers and additional costs that would trash our chances of an economic recovery.”

And Mr Jack stated: “Without this legislation there would be a serious risk to our jobs and businesses which is not surprising given the rest of the UK is Scotland’s biggest market, worth £55 billion a year, and a massive 60% of all our exports.”