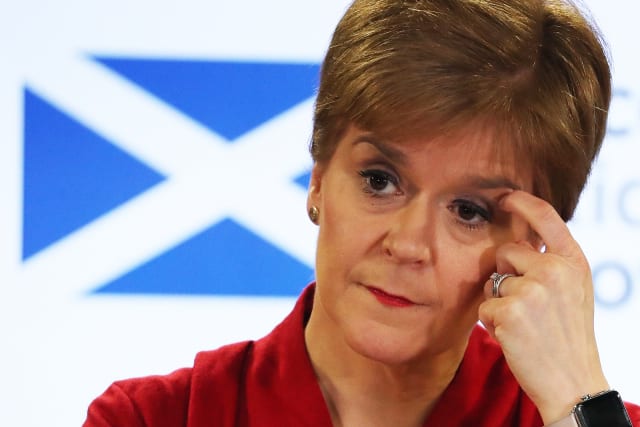 New legislation from the UK Government setting out arrangements for when the Brexit transition period ends is an “abomination” that will break devolution, Nicola Sturgeon has said.

While Conservative ministers in London have repeatedly said the proposals will transfer powers from Brussels to the administrations in Edinburgh, Belfast and Cardiff, Scottish Government ministers have branded them a “power grab”.

Ms Sturgeon has vowed the Scottish Government will “fight tooth and nail against this shameless bid to reverse the devolution of power”.

She said: “The UK Government are not only set to break international law – it is clear they are now set to break devolution.

“The Tories’ proposed Bill for a so-called UK internal market is an abomination.

“It is a naked power grab which would cripple devolution.”

The UK Government said the Internal Market Bill, which was published on Wednesday, will “guarantee companies can trade unhindered in every part of the UK as they have done for centuries”.

The First Minister claimed the “plan for mutual recognition of standards in reality means a race to the bottom when it comes to things like food standards and environmental protections”.

She said the Bill, if passed, will “prevent the Scottish Parliament from effectively legislating in a whole range of areas, including laws covering the food people put on their tables, which is currently produced to high EU animal welfare and food safety standards”.

Ms Sturgeon said: “That could be undermined by Scotland having to accept lower standards set by a UK Government in pursuit of a US or other trade deals – and could see us forced to accept chlorinated chicken.”

She added: “Their plans to trample over devolved spending powers in Scotland and directly fund their own projects could see projects like Boris Johnson’s bridge to Northern Ireland being funded instead of schools and hospitals – no matter what people in Scotland choose.”

The First Minister pledged the Scottish Government, as well as SNP MPs at Westminster, will “fiercely resist this attack on the powers of our national Parliament”.

Ms Sturgeon said: “Far from returning powers to Scotland, as promised by the likes of Michael Gove, it is now crystal clear that Brexit means taking back control from Holyrood and taking control away from the Scottish people.”

With a Holyrood election due to take place next year in which the SNP will seek to win a mandate for a second independence referendum, the First Minister added it is “now clearer than ever that the only way to defend the powers of the Scottish Parliament is with independence”.

Her comments were in contrast with those of Cabinet office minister Michael Gove, who said: “The devolved administrations of the UK will enjoy a power surge when the transition period ends in December.

“Holyrood, Stormont and Cardiff Bay will soon have more powers than ever before and there will be no change to the powers the devolved administrations already have.”

UK Business Secretary Alok Sharma said the legislation is needed to ensure businesses in the four countries that make up the UK can continue to trade smoothly with each other after the end of this year.

“Today’s Bill will protect our highly integrated market by guaranteeing that companies can continue to trade unhindered in every part of the UK after the Transition Period ends and EU law falls away,” he said.

“Without these necessary reforms, the way we trade goods and services between the home nations could be seriously impacted, harming the way we do business within our own borders.”

Scottish Secretary Alister Jack warned jobs north of the border could be put at risk without the Bill.

He said: “Without this legislation there would be a serious risk to our jobs and businesses which is not surprising given the rest of the UK is Scotland’s biggest market, worth £55 billion a year, and a massive 60% of all our exports.”

The Scottish Trades Union Congress claimed the proposals could “kick-start a race to the bottom on employment protection, environmental and food standards”.

STUC general secretary Roz Foyer said: “If we needed further evidence that Boris Johnson leads a rogue, right-wing government oblivious to the threat of provoking constitutional and legal crises, here and abroad, it is on show for all to see today.”