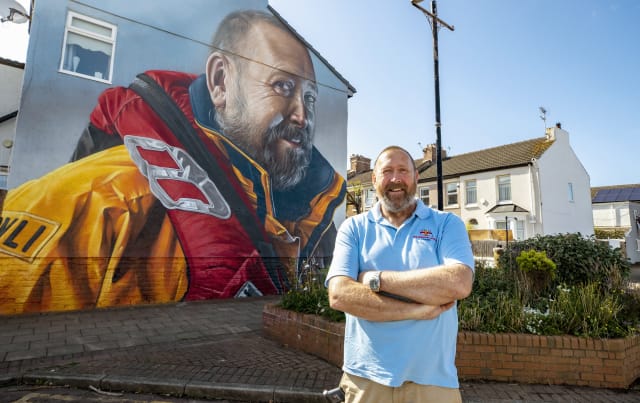 A volunteer lifeboat worker has been been commemorated for his 40 years of service with a giant mural of his face on the side of a building.

Mike Jones started at the RNLI in New Brighton on the Wirral in 1980 when he was just 18, and his service has now been honoured with a painting of his face on a house by graffiti artist Smug One.

Mr Jones has been keen on boats since he was a child and admits part of the attraction of volunteering is “the toys we play with”.

But he added: “It’s helping other people, and the teamwork – the camaraderie of the crews.

“Everybody works together as a team, one big team all the time. It’s one big family.”

The positioning of the mural, called Unsung Heroes, on Virginia Road means Mr Jones is looking out towards the Irish Sea.

Ian Thornton, lifeboat operations manager at New Brighton Lifeboat, said: “This is a fantastic and fitting tribute to an amazing person who has volunteered for 40 years with the RNLI.

“Due to the location of the mural, Mike will always be looking out to sea to keep an eye on what’s going on.”