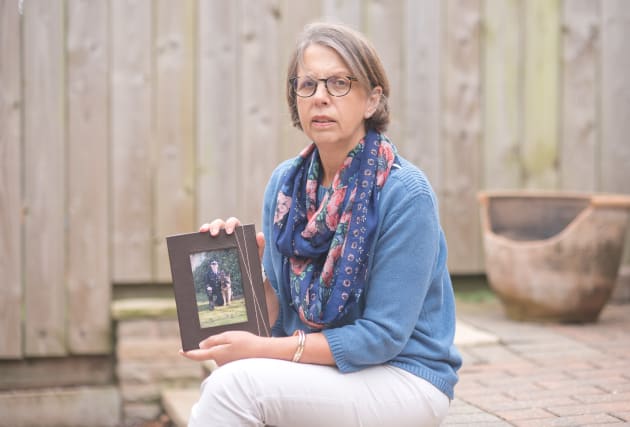 The widow of a police dog handler who died when he was dragged along by a stolen taxi is backing the campaign for life sentences for those who kill emergency services workers.

Pc Ged Walker died in 2003 when he was dragged 100 yards and killed as he tried to take the keys from the ignition of the car in Bulwell, Nottinghamshire.

In a statement on the Thames Valley Police Federation Facebook page, Mrs Walker said: “Lissie’s battle to achieve Harper’s Law really resonates with my own story.

“Ged was attempting an arrest and was dragged 100 metres by the taxi the offender had stolen. And sadly, like Lissie, we did not get the verdict of murder, and a manslaughter verdict was given.

“Like Lissie, I felt let down by the system that deemed this barbaric act as unintentional and not deliberate.”

The driver David Parfitt was convicted of Pc Walker’s manslaughter and sentenced to 13 years in prison, serving nine. He was later jailed again for other crimes.

Mrs Walker said: “This man is allowed to live near me. If a life sentence had been given, he would have been on licence for life and recall (to prison) could have happened.

“Instead he receives supervision orders and drug and rehabilitation orders.

“What Lissie is trying to do is so important – time hasn’t diminished my pain and anger.

“In fact, it’s made me more determined to bang the drum about it so that people can understand the situation and what often happens when police officers get killed in this way.”

Pc Harper died when he became entangled in a tow rope as he tried to stop quad bike thieves in a Berkshire village in August last year.

He was dragged along dark country lanes and fatally injured.

The driver of the car, Henry Long, 19, and his two passengers Albert Bowers and Jessie Cole were cleared of murder and found guilty instead of manslaughter.

Long is set to appeal against his 16-year sentence, while the two 18-year-olds are appealing against both their convictions and 13-year sentences.

In a separate move, following a referral by the Attorney General, Court of Appeal judges will also consider whether the jail terms were too lenient.

Mrs Walker added: “What Lissie is trying to do is so important as this should never be allowed to happen again to others.

“Police officers get dragged by cars all the time, but vehicles don’t seem to be considered as the weapon they are.

“So many officers are injured by vehicle crime, but it’s severity when sentencing is never dealt with the same as gun and knife crime.

“There are no consequences stopping people from doing this – there just doesn’t seem to be any accountability or deterrent.”

Police leaders want the law changed to create a specific offence of using a vehicle against an officer, and will also look at safety measures including remotely operated immobilisation devices.

The Harper’s Law campaign has already been backed by Ruth Browning, whose husband Gareth was killed in 2013 as he tried to stop a stolen car.

Mrs Harper said: “To have the support of such a brave lady as Tracy, Ruth Browning – the widow of Pc Gareth Browning – and so many other police widows and widowers is so humbling and important.

“They join police officers from across the country, the public, the media and now politicians from all parties in giving us their support. The momentum continues to build and together we will achieve Harper’s Law.

“It’s going to be a long road but we must continue and battle for this. We must provide an appropriate punishment and a suitable deterrent to those who would kill our emergency services heroes.

“It means so much to so many.”