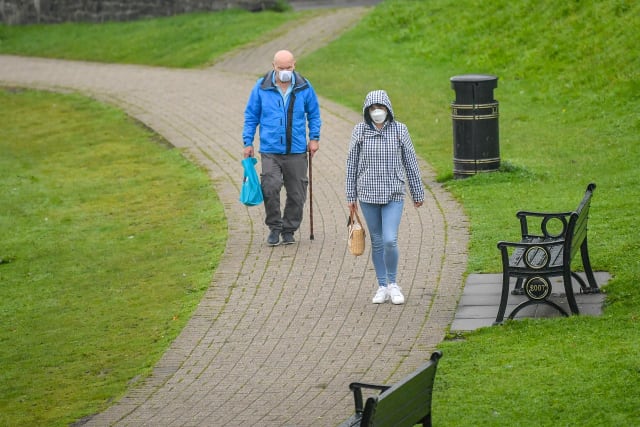 Health officials have raised concerns over the “significant rise” in coronavirus cases in the Merthyr Tydfil and Rhondda Cynon Taf areas of south Wales.

Public Health Wales said the increase in transmission appeared to be due to a lack of social distancing by people of all ages in a range of locations.

On Wednesday, the number of positive cases in Wales increased by 165 – representing the highest daily figure since May 20, when 166 were reported.

A local lockdown began in Caerphilly county borough on Tuesday evening, while travellers arriving in Wales from the Greek islands of Santorini, Serifos and Tinos now have to self-isolate for 14 days.

Dr Giri Shankar, from Public Health Wales, said: “We are concerned at the significant rise in positive coronavirus cases in the Merthyr Tydfil and Rhondda Cynon Taf areas over the past few days, and our investigations indicate that a lack of social distancing by people of all age groups in a range of different locations has resulted in the spread of the virus to other parts of the population.

“It appears that as lockdown restrictions have eased, people have taken advantage of the greater possibilities for activities, but they seem to have forgotten the importance of social distancing – resulting in possible transmission in the wider community.

“It is clear that the virus spreads more easily in indoor settings, and people should take extra care to socially distance in these cases to keep themselves and their friends and families as safe as possible.”

Dr Shankar said Public Health Wales supported the local lockdown restrictions in Caerphilly, which he said were “essential” to limit the spread of Covid-19.

Under the measures, everyone aged over 11 must wear a face covering in indoor spaces such as shops.

Travel in and out of the county is limited to those with a “reasonable excuse”, and people from different households are not allowed to meet indoors.

Dr Shankar added: “Coronavirus can be a very serious illness, especially for older people or those with existing conditions, and a decision to introduce wide ranging restrictions such as these is not taken lightly.

“We remind the public that they have a vital role in preventing the spread of coronavirus, and that adhering to these restrictions is of the utmost importance.”

He appealed to anyone in the area to book a coronavirus test even if they had “the mildest” of symptoms or were feeling “generally unwell with no explanation”.

Speaking to BBC Radio Wales on Wednesday, Chris Bryant, Labour MP for Rhondda, warned the area could also be placed under local lockdown by the weekend.

“That is if we carry on as we are at the moment and that is because some people – a small minority – are being fundamentally irresponsible,” Mr Bryant said.

He said such people were refusing to self-isolate after holidays abroad, refusing to be tested despite having Covid-19 symptoms, gathering in large groups and having house parties.

Mr Bryant claimed some people were giving false contact tracing information to pubs and pretending to be part of the same household.

The MP also urged parents not to break social-distancing rules when at the school gates.

In Powys, the county council said it had received reports of parents gathering outside schools when dropping off and collecting their children.

Cllr Phyl Davies, cabinet member for education and property, said: “We have done a lot of work with school leaders to make sure that children are safe in their school and that the risk of the virus spreading is minimised.

“It would be a shame if this work was undone by parents and older relatives ignoring social distancing by gathering outside the school gates.”

Headteachers in the county also raised concerns that parents had been contacting schools asking them to confirm whether a member of the school had tested positive for Covid-19.

Local authority leaders, the health board and Dyfed-Powys Police cautioned people in the Carmarthenshire, Pembrokeshire and Ceredigion region that a local lockdown could happen if they did not socially distance.

The warning came after a cluster of coronavirus cases were confirmed in Carmarthenshire, centred around a community event.

Figures released by Public Health Wales on Wednesday showed there have been no further deaths in people with coronavirus, with the total in Wales since the beginning of the pandemic remaining at 1,597.