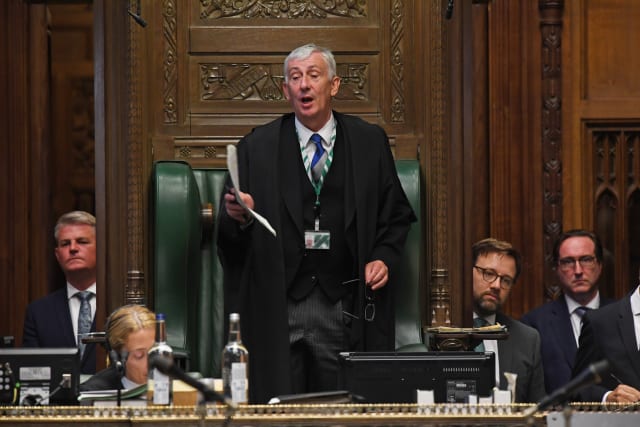 The Commons Speaker has threatened to run Matt Hancock “ragged” over his failure to inform MPs first about major changes to coronavirus restrictions.

Sir Lindsay Hoyle said he accepted decisions are taken in a fast-moving way but blasted the Health Secretary for not telling the Commons about new rules banning social gatherings of more than six people.

The Covid-19 policy change was officially released via the media on Tuesday evening.

Mr Hancock made a Commons statement earlier on Tuesday to update MPs about Covid-19 without mentioning the new restrictions, even though details were already being reported by that point.

Sir Lindsay suggested he would allow MPs to direct an urgent question (UQ) at Mr Hancock every sitting day in the Commons in a bid to bring the Cabinet minister into line.

The Speaker receives requests on a daily basis for extra issues to be added to the Commons schedule.

This includes in the form of UQs, although the Secretary of State of the relevant department is not required to respond and can send a junior minister in their place.

After concerns were raised by Tory former minister Sir Desmond Swayne about the Government’s “ability to govern by order without debate”, Sir Lindsay told the Commons: “It’s really not good enough for the Government to make decisions of this kind in a way which shows insufficient regard for the importance of major policy announcements being made first to this House and members of this House wherever possible.”

The Speaker said he had written to Mr Hancock and criticised his “total disregard” for the Commons.

Shadow health secretary Jon Ashworth added: “There was no reason why the Secretary of State could not have told the House yesterday this was the Government’s plan.”

He also said: “Should we assume ministers don’t know what they’re doing from one day to the next?”

Sir Lindsay, in his reply, said: “I expect the Secretary of State to apologise to members and make sure that this chamber knows first of when he was fully aware of what was going to be said later.

“And let me say, if this minister wants to run this chamber ragged I can assure you now I’m sure a UQ (urgent question) every day might just begin to run him ragged.”