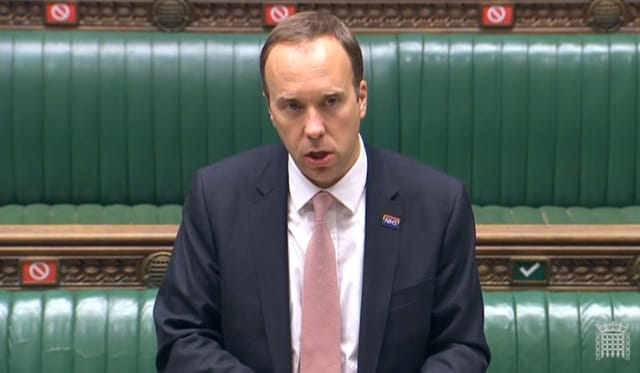 The Health Secretary has warned of a possible second peak of coronavirus following a “concerning” rise in the number of cases.

A recent spike in cases across the country should be a reminder that the virus “remains a threat”, he said.

“This is not over,” he told the House of Commons.

“Just because we have come through one peak doesn’t mean we can’t see another one coming towards our shores.”

It came after a senior official at NHS Test and Trace issued an apology to people unable to get a Covid-19 test.

Director of testing Sarah-Jane Marsh said there is capacity at testing sites but laboratories processing the tests are at a “critical pinch-point”.

Ms Marsh wrote on Twitter: “Can I please offer my heartfelt apologies to anyone who cannot get a Covid test at present.

“All of our testing sites have capacity, which is why they don’t look overcrowded; it’s our laboratory processing that is the critical pinch-point. We are doing all we can to expand quickly.

“We have additional NHS, Lighthouse, University and Partner Labs all due to open up imminently and we are also expanding the use of non-laboratory based tests. The testing team work on this 18 hours a day, seven days a week. We recognise the country is depending on us.”

Andy Thompson, 38, a technical manager from Crewe, said his six-year-old daughter is home from school with a continuous cough, but has so far been unable to get a home test.

“It’s an absolute shambles. No home tests available. And now the nearest test centre is Oldham, a 100-mile round-trip with a sick child,” he told the PA news agency.

“I didn’t realise how bad it is. If you haven’t got a car, no way you’re getting tested.”

People have also complained in recent days and weeks of being directed hundreds of miles to get a test.

Meanwhile, Mr Hancock told the Commons that the rate of coronavirus cases in Bolton is the highest in the country.

The rise in cases in the region is partly due to socialising by people in their 20s and 30s – with a number of cases linked to some pubs, he added.

He said all hospitality in Bolton would be restricted to takeaways only, and a late-night restriction of operating hours is to be introduced, meaning that venues will have to close between 10pm and 5am.

Meanwhile, the current guidance which states that people cannot socialise outside their household will become law, he added.

– It is understood that officials are considering reducing the number of people who can gather indoors in England. The current limit is 30 but it could be cut as a result of the current spike in cases.

– Welsh Health Minister Vaughan Gething has said a local coronavirus lockdown is being imposed in Caerphilly because there is evidence of “community transmission” in the area.

– Restrictions on household visits across western parts of Scotland have been extended for a further week and expanded to also include East Dunbartonshire and Renfrewshire.

– There were a further 2,948 lab-confirmed cases of coronavirus in the UK as of 9am on Monday, following the 2,988 reported on Sunday, which was the largest daily figure since May.

– A new Covid-19 cost tracker has been set up by the National Audit Office (NAO). The spending watchdog said that during the Government’s response to the pandemic, it had announced 190 measures, which have a total estimated cost of £210 billion. The NAO estimates the Government has so far spent more than £70 billion.

– Mr Hancock also announced that the Government now has agreements with six separate vaccine developers for early access to 340 million doses of vaccine.

On Monday, Mr Hancock pledged that people would have to travel no more than 75 miles for a test.

Labour said the testing system had been a “fiasco”.

But Mr Hancock told the Health and Social Care Select Committee that problems with coronavirus testing capacity will be sorted within weeks.

Further problems with the testing system came as a member of the Government’s Scientific Advisory Group for Emergencies (Sage) said the latest increase in coronavirus cases is “very worrying”.

“That is what we are really keeping a close eye on – the extent to which it moves away from these local outbreaks to broader community transmission.

“What we saw in the last few days from this surveillance data was this worrying increase in cases which, as we know from the first wave of the pandemic, can potentially get out of hand if we don’t be very serious about the control measures.”

It comes after Professor Jonathan Van-Tam said on Monday that the public had “relaxed too much” over the summer and described the rising number of cases as of “great concern”.

The deputy chief medical officer for England said: “This is a big change. It’s now consistent over two days and it’s of great concern at this point.

“People have relaxed too much. Now is the time for us to re-engage and realise that this is a continuing threat to us.”

Professor Whitty echoed the concerns, and wrote on Twitter: “We have, through the extraordinary efforts of the whole population, got Covid rates right down.

“They are now rising again, especially in those aged 17 to 29. If we stop social distancing, Covid comes back. We all need to protect others.”

Mr Hancock earlier told the Health and Social Care Committee that the first “credible” cases of coronavirus reinfection were starting to be seen.

“We have also just started to see the first credible cases of reinfection and, through genomic analysis, you can see it is a different disease to the one the person got the first time around.

“But the hard question is – because one of the most difficult parts of dealing with this virus is asymptomatic transmission – what we don’t yet know is the transmissibility of the disease even from an asymptomatic person who might have had the disease before.

“But we have got a huge amount of work going into answering that question.”

Meanwhile, Boris Johnson told his Cabinet that ministers must ensure there is “no complacency” among the public, and particularly young people, after a rise in coronavirus infections.

Mr Johnson’s official spokesman said: “The Prime Minister cautioned that in other countries which had seen an increase in infections this was followed a number of weeks later by a rise in hospitalisations.

“The PM said that what had taken place elsewhere was that young people had gone on to infect older generations that had become seriously ill, and it was vital to ensure that did not happen here.

“The Prime Minister said the Government must remain extremely vigilant and ensure that there was no complacency from the public and young people in particular in following the guidance on how to prevent the virus from spreading.”