Trump orders reporter to remove his mask at press briefing 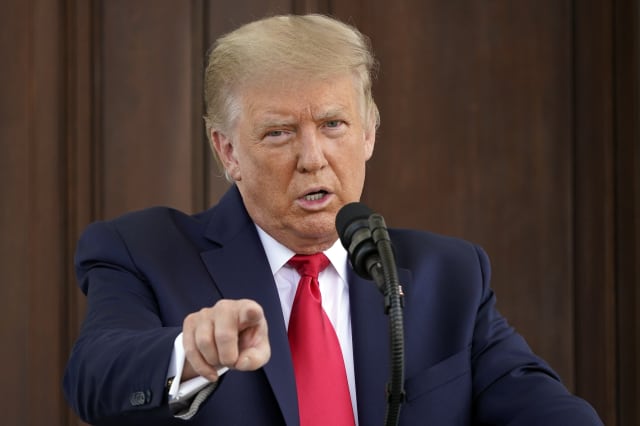 President Donald Trump demanded that a reporter remove his face mask in the middle of a question at a White House press briefing on Monday — but the journalist refused.

"You're going to have to take that off. Just take it off," said Trump as he pointed to the mask worn by Jeff Mason, White House correspondent for Reuters.

"How many feet are you away?" asked the irritable president, referring to social distancing efforts to help stop the spread of COVID-19. "If you don't take it off, you're very muffled. So if you take it off, it would be a lot easier."

But Mason could easily be understood on a recording of the exchange. He began his question referring to Trump's decision two years ago not to attend a memorial ceremony for fallen American soldiers at a French cemetery. The president blew off the ceremony (which was attended by European leaders) after referring to deceased war heroes as "losers," according to a bombshell report in The Atlantic last week.

The visibly exasperated president sighed and responded: "It's better, yeah. It's better" — and allowed Mason to continue.

"I do not want them to build a military like they are building right now" -- this is as bellicose as I've heard Trump be about China pic.twitter.com/8fNBn0d1Xn

Mason then told Trump that people are having a difficult time believing his denials of the Atlantic story, given his harsh words about the late Sen. John McCain (R-Ariz.), who served as a Navy pilot in the Vietnam War. During his last presidential campaign, Trump had said that McCain was not a hero because he had been a prisoner of war for five years and called McCain a "loser." He said at the time, "I like people that weren't captured."

Trump responded on Monday: "I have always been on the opposite side of John McCain. John McCain liked wars. ... Frankly, I was never a fan of John McCain, you know that."

Later in the briefing, Trump praised a reporter who wasn't wearing a mask. "You sound so clear, as opposed to everybody else where they refuse [to take off their mask]," he said.

"You sound so clear, as opposed to everybody else where they refuse" -- Trump praises a reporter for not wearing a mask pic.twitter.com/AA8pz6v4ob

While reporters at press briefings are usually many feet from the president, they may be much closer to other journalists.

Trump said in July that it was "patriotic" to wear a face mask — but he has rarely been seen with one.

We are United in our effort to defeat the Invisible China Virus, and many people say that it is Patriotic to wear a face mask when you can’t socially distance. There is nobody more Patriotic than me, your favorite President! pic.twitter.com/iQOd1whktN