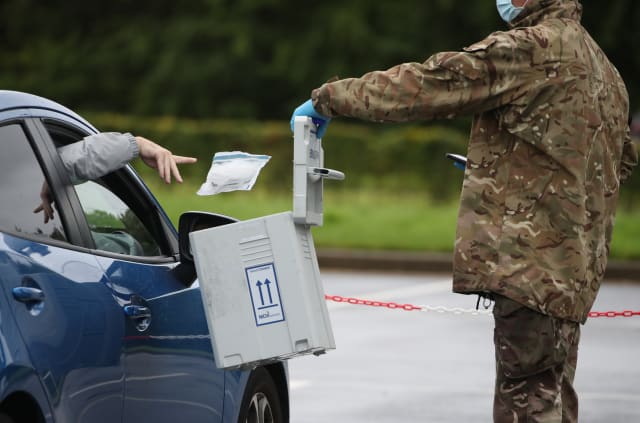 Teachers have complained that the current coronavirus testing system is “not fit for purpose” after several reported missing classes due to a lack of available tests.

One teacher near Birmingham told the PA news agency she and her son were missing school because they were unable to get a home test. The nearest drive-in centres were Oldham in Greater Manchester or Romford in Essex.

“I think any school is going to have difficulty eventually unless things change. I should have been able to walk in today and get a test and be back at my desk in 24 hours,” said the teacher, who asked not to be named.

“In my opinion the testing system is not fit for purpose and is preventing me from doing my job.”

Another teacher at a school for vulnerable pupils in Greater Manchester told PA she was the third of its staff members currently self-isolating.

The 38-year-old, from Stockport, said she had eventually got a test for her son at his school, but was unable to get one for herself due to the high demand.

She added: “They needed a much better testing system in place before they reopened schools. It’s not like they haven’t had six months to sort it out!”

Sarah-Jane Marsh, director of the NHS Test and Trace programme, apologised for the shortage after admitting that capacity was at a “crucial pinch-point”.

Her comments came after Education Secretary Gavin Williamson insisted the Government was “very much” in control of the reopening of schools.

Kevin Courtney, joint general secretary of the NEU, said: “We need a far more robust and accessible trace, track and test system with testing centres within a reasonable distance.

“We are hearing stories of teachers being told they must travel hundreds of miles for a test – the Government must act on this immediately.”

Parents also reported children missing classes due to the lack of available testing.

Andy Thompson, 38, a technical manager from Crewe, said his six-year-old daughter is home from school with a continuous cough, but has so far been unable to get a test.

“It’s an absolute shambles. No home tests available. And now the nearest test centre is Oldham, a 100-mile round-trip with a sick child,” he told PA.

“I didn’t realise how bad it is. If you haven’t got a car, no way you’re getting tested.

“And if you aren’t computer literate, don’t bother as the phone line is useless. I’ve tried every option to speak to someone and it just hangs up saying call back later they are busy.”

He said his daughter became sick only two days after returning to primary school and was now unable to go back until she had a negative test or had quarantined for 14 days.

Social media seen by teenager too extreme even for adults, coroner told

Frank Lampard: Silva and Chilwell keep impressing on and off the pitch