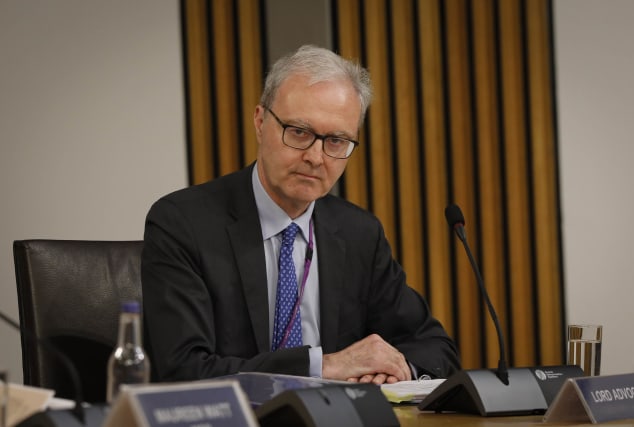 The Scottish Government has said it will provide more information to MSPs probing its handling of sexual harassment allegations against Alex Salmond – as the former first minister offered to go to court in an attempt to get the papers released.

Lord Advocate James Wolffe QC said the committee would be provided with a a further written document “providing more detailed information about the judicial review” brought by Mr Salmond.

He added that the Scottish Government was “looking again” at whether court documents from the case – which resulted in a pay-out of some £512,000 to the former first minister – could be released.

His comments came as Mr Salmond’s legal team criticised the Scottish Government’s refusal to provide certain documents to a Holyrood inquiry and for giving the committee “partial and incomplete evidence”.

As Mr Wolffe gave evidence to the Committee on the Scottish Government Handling of Harassment Complaints, convener Linda Fabiani spoke about the MSPs’ “frustration at the lack of information” they had received from the government.

The Lord Advocate told her: “The Government has made clear it is committed to co-operating as fully as possible with the committee’s inquiry.

“The Government will provide the committee with a further written document, providing more detailed information about the judicial review.

“The Government is currently looking again at what steps it can take with a view to enabling the committee to have access, so far as possible, to the relevant court documents.”

He added: “Ministers are available, and indeed I am available, to answer questions from the committee about the Government’s legal position.”

Mr Wolffe’s comments came as a letter from Mr Salmond’s lawyers revealed he is prepared to appeal to the Court of Session for certain documents submitted by the Scottish Government in its failed attempt to defend the “unlawful” investigation into complaints about his behaviour.

Lawyer David McKie said the Committee would have to cover the cost of legal action to try to get the evidence released.

“We note that the Scottish Government continues to delay and to provide partial and incomplete evidence,” he wrote.

“That pattern is familiar to us from the judicial review proceedings.”

He added: “We do not understand why an offer to produce these documents has not been offered in full by the Scottish Government, whose documents they are.”

Referencing the Scottish Government’s apparent reluctance to hand over “critical documents”, he said there are two options for getting them released.

The “quickest and cheapest route” is if the Scottish Government agrees to release all the documents cited by Mr Salmond as relevant.

If it refuses or further delays making the papers available, Mr McKie said: “The second option, which we are willing to undertake on behalf of the committee, would be for Mr Salmond to return to court to seek the express consent of the court to have those documents passed to the committee.”

Arguing it would not be fair for Mr Salmond to bear the legal costs of a court appeal, he said: “Whilst we are more than content to make that application on behalf of the committee, we would require clarification that all legal costs would be met by the committee.”

The letter concludes: “We regret that this matter is taking so long to progress but are not surprised.

“It is consistent with the attitude and approach of the Scottish Government throughout the litigation, nevertheless, we hope that the good faith and constructive intention of our client is clear from the content of this letter.

“Mr Salmond will work with the committee in any way he can to reach the shared goal of public disclosure of the relevant and necessary documents.”

Scottish Labour’s deputy leader and committee member Jackie Baillie said: “This explosive letter reveals the extent of the Scottish Government’s failure to be fully transparent with the committee and the public.

“The invoking of legal privilege by powerful figures has become a regular fixture in this investigation and too many vital documents have been withheld from committee members.

“We simply cannot have the endemic culture of secrecy that permeates the Scottish Government and civil service inhibiting the progress of this committee any further.

“It is time for those who hold vital information to come clean with the committee so that we can get to the bottom of this affair together.

“The continued evasion is undignified, undemocratic and simply unacceptable.”