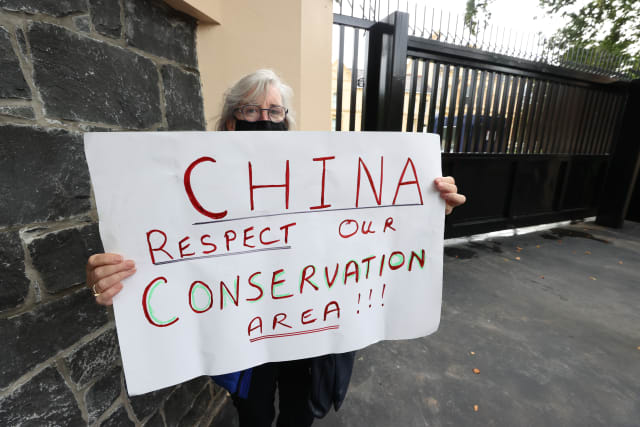 Residents have protested outside the Chinese Consulate in Belfast after completion of a new boundary wall built without planning permission.

The construction of the wall and new entrance gate by the Chinese authorities has been at the centre of a long-running dispute between the consulate and its neighbours.

During the summer, Belfast City Council attempted to obtain a court injunction to halt the building work in what is a special conservation area.

But the Chinese cited diplomatic immunity, insisting the consulate was not subject to the jurisdiction of the court, and the judge ultimately ruled she had no power to intervene to prevent the works around the historic building on the affluent Malone Road in the south of the city.

A temporary metal fence which was placed around the construction during the summer months has now been removed.

Several residents staged a picket outside the consulate on Tuesday morning to demonstrate their ongoing anger.

The consulate is based at MacNeice House, a listed building dating back to 1889.

The Chinese authorities have previously insisted the new wall respects the character of the area while meeting its security requirements.

A Belfast City Council spokeswoman said: “The Chinese Consulate is located at MacNiece House which is a listed building, and trees within and around the site are protected by Conservation Area Status which means council as a planning authority is under a statutory obligation to provide special protection to it.

“There were ongoing works at the site which were in breach of planning legislation.

“These works attracted a significant number of complaints from local residents and elected representatives.

“The consulate asserted diplomatic immunity in respect of the works and the council was working with the consulate to try to resolve residents’ concerns.

“When that was not possible and works remained ongoing, council had no option but to apply for an injunction in order to safeguard the protected building, trees and conservation area. Regrettably the court did not find in the council’s favour.”