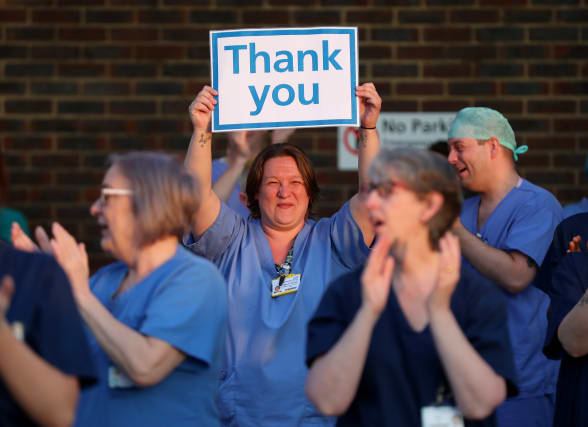 The Prime Minister has expressed the “debt of gratitude” owed to NHS and emergency services workers ahead of “999 Day”.

Emergency Services Day, also referred to as 999 Day, begins with a two minutes’ silence at 9am on September 9, to represent the ninth hour of the ninth day of the ninth month.

The public are being encouraged to fly the flag of 999 Day and to share and promote an emergency services charity on social media.

Organisers said the event is an opportunity to pay tribute to the two million people who work and volunteer across the NHS and emergency services, including more than 250,000 first responders.

It also aims to educate the public on using the services responsibly, as well as raising money for charities and to highlight the different career and volunteer roles in the emergency services.

Now in its third year, Emergency Services Day is backed by Prime Minister Boris Johnson and the First Ministers of Northern Ireland, Scotland and Wales – and has been promoted by members of the royal family.

Mr Johnson said: “It takes a very special kind of person to put your life on the line for a complete stranger, yet that is what we see day in, day out from the remarkable men and women of our emergency services.

“You protect us from harm, deliver us from danger, and tend to us in our hours of need. And you do so without hesitation or complaint – if we dial 999, we know you will be there for us.

“I know the dedicated men and women of the emergency services did not get into this line of work for the accolades or applause.

“You are heroes of British life, doing what you do not for the plaudits but out of a sheer sense of duty and a determination to serve the public.

“All of us in this country owe each of you a debt of gratitude.

“So, it is only right that, on Emergency Services Day, we celebrate your work and, as a nation, say a huge thank you for doing so much for so many.”

Organisers said a main national “open day” style event is held on the nearest Sunday, but this year’s event, which was scheduled in Belfast, was cancelled due to coronavirus.

Last year, the Duke of Cambridge visited the Fire Fighters Charity’s centre at Harcombe House in Chudleigh, South Devon, to mark the event.

Tom Scholes-Fogg, founder and chief executive of Emergency Services Day, said: “As we saw earlier this year with people clapping at their doors, the UK is united in its support for those who put others before themselves.

“I encourage everybody to support our emergency services personnel all year round, not just on 999 Day.”