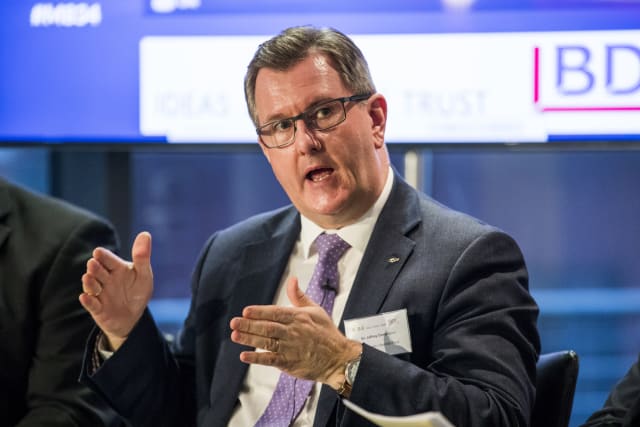 A senior DUP MP has insisted the party is not divided on its position to the Northern Ireland protocol.

Sir Jeffrey Donaldson maintained there was “only one train of thought” among his colleagues on the Brexit withdrawal deal amid questions around seemingly contrasting positions taken by leader Arlene Foster and other party figures.

Scrutiny of the DUP’s stance has intensified as speculation continues over the Government’s apparent desire to use domestic legislation to override elements of the contentious protocol.

On Monday night the DUP issued a statement saying the Withdrawal Agreement must be scrapped or changed to ensure Northern Ireland’s place within the Union is protected.

However, in an interview aired on Friday Mrs Foster said she had to “recognise the reality” that the agreement is now law and she has to be part of the process that sees the Northern Ireland protocol implemented.

In an interview with Sky News, she said: “I mean, there are some who would continue to fight against the protocol; I have to recognise that that is the reality now.”

Under the protocol agreed by the EU and UK in the withdrawal deal, Northern Ireland will continue to follow single market rules for goods and administer the EU’s customs code at its ports.

The Government’s critics have accused it of bad faith after it was reported that it would seek to use Westminster legislation to changes aspects of the protocol related to state aid and customs administration.

Sir Jeffrey said such moves would be welcome.

“We hope this bill will now address some of the key issues that present a real challenge for business in Northern Ireland if the EU are to have its way,” he said.

Asked if his party leader had a different view, he told BBC Radio Ulster: “There’s only one train of thought in the DUP and that is reflected in the statement published last night, which was agreed by the party leader and by our leadership team generally.”

He insisted Mrs Foster’s comments to Sky did not relate to the prospect of a customs border in the Irish Sea.

“We’ve rejected that completely and will continue to oppose vigorously any move to create a customs border in the Irish Sea because it would be harmful for businesses, but also it would drive up the cost to the consumer in Northern Ireland and that is unacceptable,” said the Lagan Valley MP.

“Arlene was very clear that we have and continue to oppose the elements of the Northern Ireland protocol that would require a customs border in the Irish Sea.

“That has consistently been our position and that position won’t be changing. It is unacceptable.”

Will the Queen break this Christmas tradition?