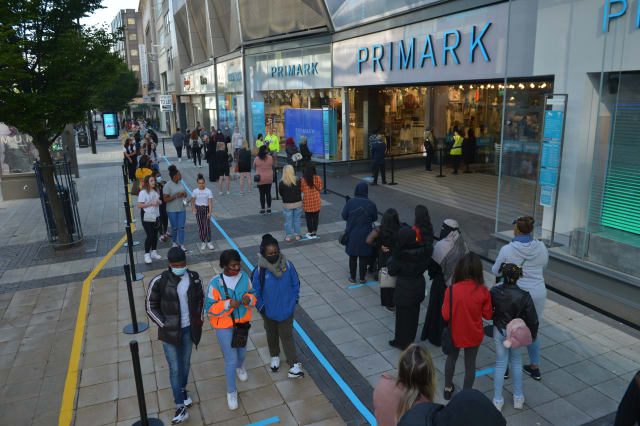 The owner of Primark has said a surge in summer sales has put the company on track to top its profits forecast after reopening stores.

Associated British Foods (ABF) told investors on Monday that sales at Primark stores have been “reassuring and encouraging” since they welcomed customers back in June.

The consumer group said trading in its food divisions has also been better than predicted so far in the fourth quarter, as it provided a pre-close trading update for the financial year to September 12.

Primark stores have traded “strongly” during the quarter as ABF said they attracted customers for their “value-for-money offering and a welcoming and safe store environment”.

It said it expects to report around £2 billion in sales since the reopening of stores until the end of the year.

Sales have been driven by larger customer baskets with transaction sizes initially “significantly higher” than last year due to “pent-up demand”.

ABF chief finance officer John Bason told the PA news agency: “We are encouraged that we’ve seen broadly-based progress, but I think the particularly strong takeaway has been the power of the Primark brand.

“Having been closed for three months obviously caused pressure, but all over the country we’ve seen sales above what we were seeing last year.

“We saw big baskets in June but recent sales haven’t been due to pent-up demand and that’s really encouraging. July was great and ‘back to school’ meant we saw a terrific end to August.”

The company said sales at stores in retail parks have been higher than last year, while shopping centre and regional high street stores are broadly in line with their average.

However, the largest stores in major shopping destinations have been hit by a significant slump in footfall amid lower numbers of tourists.

In the UK, like-for-like sales since reopening are expected to be 12% lower than the same period last year after being weighed down by weaker performances at Primark’s four largest stores.

It added that the earlier-than-expected reopening of stores means it now expects to book a £150 million hit from unsold inventory, having previously predicted that it would face a £284 million exceptional charge.

ABF said adjusted operating profits at the Primark business are now expected to be “at least at the top end” of its previous forecasts of £300 million to £350 million.

The group said it also expects a “very strong” increase in the aggregate adjusted operating profit for its sugar, grocery, agriculture and ingredients businesses over the last year.

Grocery sales were boosted by a continued jump in retail volumes in its key markets of the US, Europe and Australia.

The company said this was particularly driven by growth in the UK grocery arm and Twinings tea business, although it said revenues were held back by lower sales for Ovaltine and Allied Bakeries arm, which makes Kingsmill bread.

A jump in demand for store-cupboard ingredients following the pandemic benefited its Silver Spoon, Jordans, Dorset Cereals, Ryvita and AB World Foods arms in the second half.

ABF said increased demand for yeast and bakery ingredients, particularly across the Americas and China, helped its ingredients arm, while the sugar business is also expected to deliver improved profits for the year.