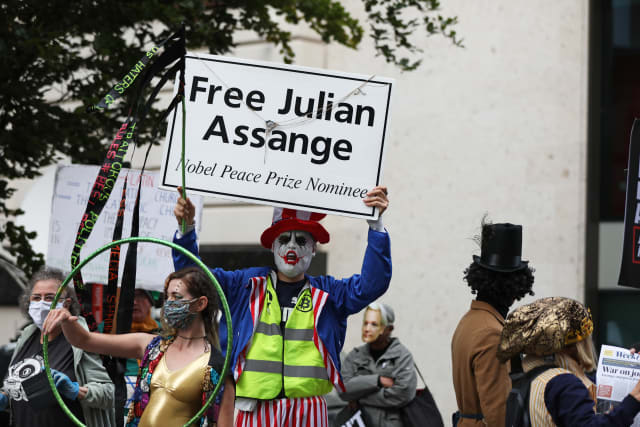 Drums were beaten as crowds of protesters roared outside the Old Bailey demanding WikiLeaks founder Julian Assange is freed ahead of his extradition hearing.

More than 100 protesters, many brandishing placards saying “don’t extradite Assange”, and members of the media gathered outside the London court on Monday morning in support of Assange’s fight against extradition to the United States.

The 49-year-old faces 18 charges including plotting to hack computers and conspiring to obtain and disclose national defence information.

Allegations include that Assange conspired with army intelligence analyst Chelsea Manning to crack a password to a classified US Department of Defence computer.

Protesters were joined by Assange’s father John Shipton, who spoke to the crowds and media before heading into the court.

He said: “Julian has two young children, what concerns me today is the rights of those children.”

As he showed crowds a picture of Assange and his partner Stella Moris, Mr Shipton said: “Julian hasn’t seen those children for six months.

“They weren’t allowed to embrace their father under the regulation that if they touched each other Julian would have to spend two weeks in self-isolation, in quarantine, in jail, as if circumstances are not dire enough.”

He described the extradition hearing as an “abuse trial”, adding: “The insistence, the malice that constantly falls like a Niagara upon Julian is just appalling, and indicates to us that the administration of justice here is enfeebled.”

WikiLeaks editor-in-chief Kristinn Hrafnsson said he was “hesitant to be hopeful”.

Addressing supporters outside court, he said: “But hope is not enough, we need to fight for the justice.

“We need to show our determination to have this extradition hearing dismissed because the future of journalism is at stake.”

Fashion designer Dame Vivienne Westwood, an ardent supporter of Assange, joined demonstrators dressed in a yellow and black sports top, trainers and carrying a football with the word “justice” emblazoned across it.

She added: “We’ve got to protect human rights. The establishment is corrupt, they will not listen to Julian.”

One protester, Lise Brand, 56, from Surrey, said she has been a big supporter of Assange, who has been held in custody at high-security Belmarsh Prison for 16 months, ever since he founded WikiLeaks.

“He is looking at 175 years in an American prison, I don’t hold any hope,” she told PA.

“The UK Government and justice system has treated him so badly.”