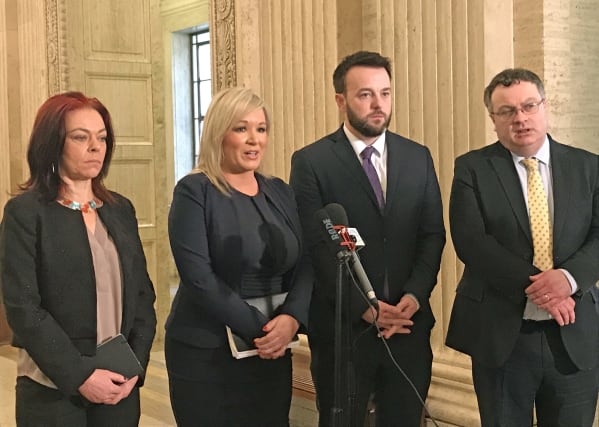 Overriding elements of the Brexit withdrawal deal would amount to a serious betrayal of an international treaty, Northern Ireland’s pro-Remain parties have warned.

In response to a Financial Times report outlining Boris Johnson’s apparent intention, the parties have written a joint letter to the Government and the EU demanding that the terms of the treaty are honoured.

Under the protocol negotiated in the withdrawal deal, Northern Ireland will continue to follow single market rules for goods and administer the EU’s customs code at its ports.

“It is entirely unacceptable to the Northern Ireland parties that the UK Government would seek to abandon these safeguards and mitigations, which we believe would amount to a serious betrayal of an existing International Treaty,” they wrote.

“The economic and political impact on the island of Ireland, on the United Kingdom and above all on the people whom we represent would be devastating, long-lasting.

“It would represent a shocking act of bad faith that would critically undermine the Good Friday Agreement political framework and peace process and the UK’s ability to secure other crucial deals to protect the Northern Ireland economy.

“We therefore call upon the UK Government to honour its commitments, and to now ensure the rigorous implementation of the Protocol, prioritise peace and stability in Northern Ireland, and work to secure a future economic partnership with their EU colleagues now and in the weeks ahead.”

The letter was sent as MLAs clashed at Stormont over the prospect of the protocol being overridden.

The issue was the first item of business in Parliament Buildings in Belfast as the Assembly returned from summer recess.

The protocol will require extra regulatory checks on some goods entering Northern Ireland from the rest of the UK, with the expansion of infrastructure to screen animals and food products.

The Government has insisted there will be no new physical customs infrastructure in Northern Ireland, but additional administrative processes on good crossing the Irish Sea are set to be required.

The issue was raised in the Assembly as a matter of the day by the SDLP.

The party’s South Belfast MLA Matthew O’Toole was highly critical of the Government.

“That the UK government would seek to use what looks like legislation in the House of Commons to undermine core tenets of the protocol is deeply worrying and disappointing, but perhaps not surprising,” he said.

“Its attitude to Northern Ireland and our institutions throughout this process has been little better I am afraid than contemptuous, certainly since Boris Johnson became prime minister.

“However, it is now lodged in the United Nations in international law. It is there to protect our society and our island from a hardening of the border on this island.

“It’s necessary, it’s essential, it becomes all the more essential when the UK government signals that it wants to strike the hardest possible Brexit”

He said he hoped the speculation proved correct and the protocol was overridden.

“It will damage our economy, because it hives us off from our largest market, the GB market.

“As a sovereign and now thankfully independent country, the United Kingdom has the right to legislate upon the regulation of its own internal market.

“It is to be hoped that this is what is about to be undertaken this week by the Government.”

The South Belfast member added: “For the sake of our country, our small businesses and our economy as a whole, I hope that the speculation is correct.”