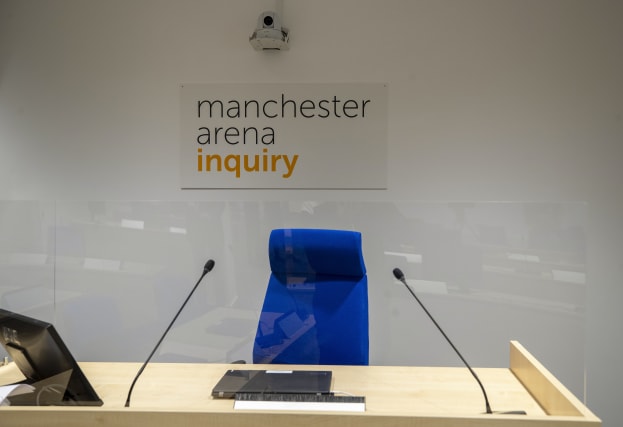 A man who tried to raise the alarm about suicide bomber Salman Abedi was “fobbed off”, and police were alerted to the lone jihadist carrying a large rucksack apparently praying outside the Manchester Arena, the first day of the public inquiry into the terror attack heard.

Loved ones of the 22 murdered in the attack wiped away tears as a minute’s silence was held, and later shook their heads as it was disclosed members of the bomber’s family are not co-operating with the inquiry into the terror outrage on May 22, 2017.

A minute’s silence was held after the names of the dead were read out as the inquiry, expected to last into next spring, began in Manchester, with about 12 family members inside the hearing room and more watching a live broadcast at a nearby conference centre.

They were told of “missed opportunities” in the hours before Abedi, surrounded by a throng of elated youngsters leaving an Ariana Grande show, exploded his shrapnel-packed rucksack bomb at 10.31pm, sending thousands of nuts and bolts shredding everything in their path.

A member of the public had challenged a man, matching Salman Abedi’s description and carrying a large rucksack, as he looked “out of place”, the inquiry was told.

The man, identified only as witness A, asked the suspect, “What are you doing?” but was told by the suspect, thought to be Abedi, he was waiting for somebody.

Witness A then spoke to Mohammed Agha, employed by venue security firm Showsec, but said he was “fobbed off”, the public inquiry heard.

Mr Agha then spoke to a colleague, Kyle Lawler, about the matter, eight minutes before the bomb went off, about what they should do.

Mr Lawler is then said to have tried to radio his security control, but could not get through.

He then saw the man get up and start walking towards the arena entrance, as youngsters began streaming out to meet waiting parents.

Mr Lawler’s statement continued: “I just froze and did not get anything out on the radio. I knew at that point it was too late.”

Paul Greaney QC, counsel to the inquiry, said experts had been asked to look into the security at the arena that night.

He said that the experts concluded: “If the presence of a potential suicide bomber had been reported, it is very likely that mitigating actions would have been taken that could have reduced the impact of the attack.”

Sir John Saunders, a retired High Court judge, is leading the probe examining events before, during and after the attack.

Formally opening the inquiry he said: “This is an exercise in establishing the truth.

“If I conclude things went wrong then I shall say so, but we are not looking for scapegoats. We are searching for the truth.”

The inquiry was adjourned until Tuesday.