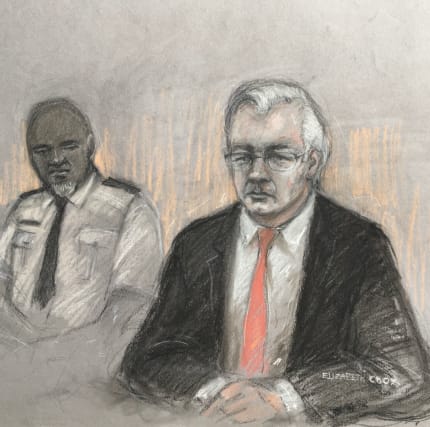 WikiLeaks founder Julian Assange has failed in a bid to exclude fresh allegations against him in his fight to avoid extradition to the United States.

The 49-year-old, who has been in high-security Belmarsh Prison for 16 months, was arrested in the cells at the Old Bailey on Monday over an indictment, containing 18 charges, lodged in June.

He and others at WikiLeaks are alleged to have recruited hackers to target computers between 2007 and 2015 using the organisation’s “Most Wanted Leaks”, a “wish list” including US military and intelligence documents up to the “Secret” level.

Assange is also said to have conspired with army intelligence analyst Chelsea Manning to crack a scrambled password, known as a “hash”, to a US Department of Defence computer.

If convicted of the charges, relating to the publication of hundreds of thousands of classified documents, he faces a maximum possible penalty of 175 years in jail.

He spoke to confirm his name and date of birth at the start of the hearing before answering “no” when asked if he consents to being extradited to the US.

Mark Summers QC, defending, said the “fresh allegations at the 11th hour” were brought without warning or explanation, giving the defence no time to properly prepare a response before the extradition hearing.

“What is happening is abnormal, unfair and liable to create injustice if allowed to continue,” he said.

But District Judge Vanessa Baraitser rejected the defence bid to “excise” the allegations, saying: “These are issues which must take place in the context of considering the extradition request and not before it.”

Assange’s lawyers later failed in a bid to adjourn the case until January to give them time to deal with the new material.

The fresh indictment supersedes a previous one, although the 18 charges, including plotting to hack computers and conspiring to obtain and disclose national defence information, remain the same.

New allegations include claims Assange recruited a teenager to hack into the computer of a former WikiLeaks associate.

According to an updated opening document, submitted by the US but not outlined by representatives in the Old Bailey on Monday, Assange met the then 17-year-old, who gave him data stolen from a bank.

“In September 2010, according to a human source, and as corroborated by the records of online chats between Mr Assange and that source, Mr Assange directed Teenager to hack into the computer of an individual formerly associated with WikiLeaks and delete chat logs containing statements of Mr Assange,” the document said.

Defence lawyers said Teenager was previously referred to in court documents as “Iceland1” and was convicted in Iceland of fraud, theft, and impersonating Assange.

Mr Summers told the court: “The FBI were kicked out of Iceland by the Icelandic authorities because it was thought they were using Teenager to frame Mr Assange.”

The new allegations include claims a television network was hacked days after it aired a documentary about WikiLeaks, which included claims Assange intentionally risked the lives of named sources.

Assange is also accused of providing a list of targets to the leader of the hacking group LulzSec and attempting to assist Edward Snowden to avoid arrest, while he was in Hong Kong, after leaking NSA documents.

His lawyers say those claimed to be “co-conspirators” have already been the subject of trials in the UK and the US a decade ago.

Edward Fitzgerald QC, for Assange, asked: “Are you aware of any publisher of leaked information ever being indicted in US history?”

Dozens of supporters, including Assange’s father John Shipton and fashion designer Dame Vivienne Westwood, protested outside court before the hearing began with demonstrators making their voices heard throughout the day.

Mr Shipton described the extradition hearing as an “abuse trial”, adding: “The insistence, the malice that constantly falls like a Niagara upon Julian is just appalling, and indicates to us that the administration of justice here is enfeebled.”

Assange’s partner Stella Moris, who has two children with him, was in court after visiting Downing Street in a bid to deliver a Reporters Without Borders petition against the extradition, which has been signed by around 80,000 people.

Dozens of witnesses are expected to be called to give evidence over four weeks, with the judgment likely to be delivered at a later date.