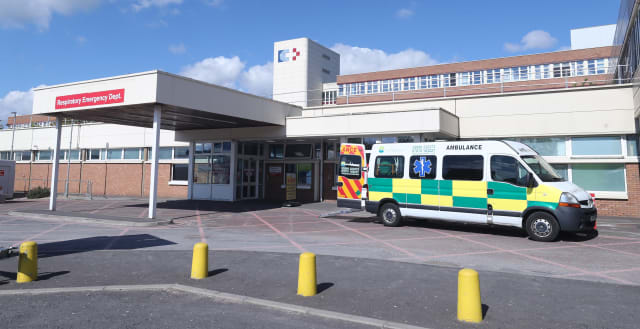 An independent probe has been ordered into Covid-19 outbreaks at a Northern Ireland hospital after the death of a fourth patient.

Three wards at Craigavon Area Hospital in Co Armagh have been hit by coronavirus clusters.

The most severe outbreak has been in the Haematology Ward.

The Southern Health Trust said a fourth patient treated in the ward who had tested positive died on Monday morning.

Last week, two patients treated on the ward died at the hospital after testing positive for the virus.

A third patient died after being discharged.

That patient had also tested positive although the virus was not the primary cause of death.

Stormont Health Minister Robin Swann has now ordered the most serious level of investigation available to him.

He announced the move as he answered an urgent oral question on the outbreaks in the Stormont Assembly.

Earlier on Monday, the minister chaired discussions with senior officials from the Southern Trust, the Public Health Agency and the Department of Health.

“I said on Friday that a thorough investigation is required and that patients and bereaved families are entitled to answers,” he said.

“I can now confirm that a level three serious adverse incident review will be initiated.

“This will be independently chaired and I expect its findings to be made public.

“I also want to again express my deepest sympathies to the loved ones of those who have passed away.

“I am deeply sorry that families have been plunged into grief in such disturbing circumstances.”

The minister said the Southern Trust’s immediate priorities were to care for affected patients and staff and prevent further spread of the virus.

“The Public Health Agency gave me an assurance at the meeting that all the actions that have been requested to reduce spread have been implemented by the Trust,” he said.

“I was also assured by the Southern Trust that support is available for families, patients and staff.

“There are undoubtedly questions that will have to be answered by the Trust in relation to these outbreaks.

“There is also a lesson for us all to keep heeding – Covid-19 remains a lethal and highly infectious virus.”

Confirming the latest death, Southern Trust chief executive Shane Devlin said: “On behalf of the Trust I extend my deepest sympathy to the patient’s family and friends.”

As of Friday, 14 patients who had been treated on the Haematology Ward had tested positive.

As well as the Haematology Ward, the Emergency Department and Ward 3 South of the hospital have also been hit with outbreaks.

On Friday, a total of 56 staff connected with the three outbreaks were off work and self-isolating.

Earlier on Monday, the Department of Health announced another Covid-19 fatality in Northern Ireland.

The death of the person who had tested positive was reported to health officials between Saturday morning and Sunday morning.

Before the latest death in Craigavon hospital was announced, the death toll recorded by Stormont’s Department of Health stood at 565.

A further 141 new cases of coronavirus in Northern Ireland were also announced on Monday.