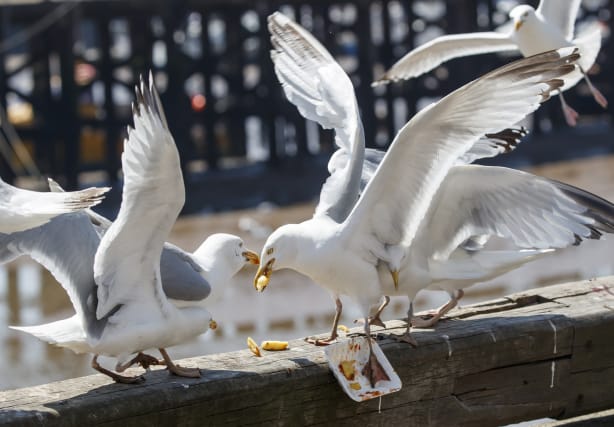 Gulls notice when approaching humans are looking at them and flee sooner when being watched, a study has found.

Researchers approached herring gulls, one of the most familiar type of seagull, while either looking at the ground or directly at the birds.

The gulls were slower to move away when not being watched, allowing a human to be two metres closer on average.

Newly fledged gulls were just as likely to react to humans looking at them as older birds, suggesting they are born with this tendency or learn it quickly.

The study, by the University of Exeter, found that urban gulls are bolder than rural gulls.

Urban gulls on average allowed a person 2.5 metres closer than their countryside counterparts before walking or flying off.

Madeleine Goumas, of the Centre for Ecology and Conservation at the University of Exeter, said: “Herring gulls are increasingly breeding and foraging in urban areas, and therefore have regular interactions with humans.

“We know from previous research that gulls are less likely to peck a bag of chips if a human is watching but in that experiment the researcher either looked at the gulls or turned their head away.

“In our new study, the experimenter approached while facing the gull and only changed the direction of their eyes, either looking down or at the gull.

“We were interested to find that gulls pay attention to human eye direction specifically, and that this is true for juveniles as well as adults so their aversion to human gaze isn’t a result of months or years of negative interactions with people.”

The study was conducted in Cornwall and targeted adult gulls, those aged four and older, as evidenced by white and grey plumage, as well as juveniles born in the year of the study that had completely brown plumage.

Rural gulls were also more than three times likely to fly, rather than walk, away from an approaching human.

“The growing number of herring gulls in urban areas may make them appear more common than they really are,” Ms Goumas said.

“The species is actually in decline in the UK, and we hope our ongoing research into human-gull interactions will contribute to conservation efforts.”

The study is published in the journal Animal Behaviour.