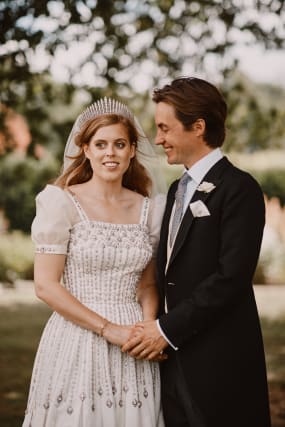 The Sir Norman Hartnell gown, first worn by the Queen in the 1960s, was loaned to Beatrice by her grandmother for her secret, low-key wedding to Edoardo Mapelli Mozzi in July.

The wedding dress will be on show at Windsor in Berkshire from September 24 until November 22 2020, the Royal Collection Trust said.

Made of peau de soie taffeta, the dress features geometric hand embroidery in crystals and diamantes over the bodice, waist and hips, and the skirt is trimmed with a band of ivory duchesse satin.

It was altered for Beatrice by the Queen’s personal adviser and dresser Angela Kelly and the fashion designer Stewart Parvin.

The Queen first wore the taffeta gown for a state dinner at the British Embassy in Rome during a visit in 1961.

She also wore it to the world premiere of Lawrence Of Arabia at the Odeon Leicester Square in December 1962 and the State Opening of Parliament in 1966.

The display at Windsor Castle will also feature Beatrice’s wedding shoes, made by Valentino, which she previously wore on other occasions including the Duke and Duchess of Cambridge’s wedding in 2011.

A replica of her bridal bouquet made from artificial flowers has been created for the exhibition.