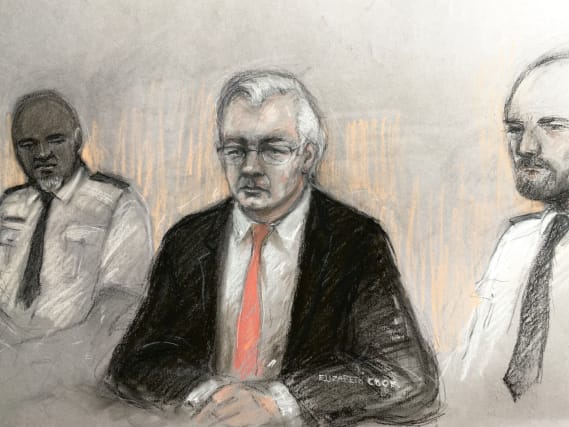 WikiLeaks founder Julian Assange has failed in a bid to rule out new allegations against him as he fights extradition to the United States.

The 49-year-old, who has been in high-security Belmarsh Prison for 16 months, is wanted over the publication of hundreds of thousands of classified documents in 2010 and 2011.

On Monday, he was arrested in the cells at the Old Bailey over a new US indictment, containing 18 charges, lodged in June.

They add detail of alleged hacking plotters, which Assange and others at WikiLeaks were said to have recruited.

Mark Summers QC, defending, said the “fresh allegations at the 11th hour” were brought without warning or explanation, giving the defence no time to properly prepare a response before the extradition hearing.

He highlighted the difficulties Assange faced in speaking to his lawyers in the midst of ongoing restrictions.

“It would be an impossible task for the defence to deal with these fresh allegations in any meaningful way in the time that has been afforded to them and that time is a matter of weeks in respect of which we are provided absolutely no explanation for the late arrival of these matters.”

He added: “What is happening is abnormal, unfair and liable to create injustice if allowed to continue.”

District Judge Vanessa Baraitser rejected the defence bid to “excise” the allegations, saying: “These are issues which must take place in the context of considering the extradition request and not before it.”

He spoke to state he does not consent to extradition after confirming his name and date of birth at the start of the hearing.

The charges against him include plotting to hack computers and conspiring to obtain and disclose national defence information.

The allegations include that Assange conspired with army intelligence analyst Chelsea Manning to crack a scrambled password, known as a “hash”, to a classified US Department of Defence computer.

If convicted, he faces a maximum possible penalty of 175 years in jail.

Dozens of supporters, including his father John Shipton and fashion designer Dame Vivienne Westwood, protested outside court before the hearing began.

She added: “We’ve got to protect human rights, the establishment is corrupt, they will not listen to Julian.”

Demonstrators roared in applause as speeches demanded the Government free Assange, while some banged drums and carried banners.

Mr Shipton described the extradition hearing as an “abuse trial”, adding: “The insistence, the malice that constantly falls like a Niagara upon Julian is just appalling, and indicates to us that the administration of justice here is enfeebled.”

A mobile billboard van drove past featuring a “Don’t extradite Assange. Journalism is not a crime” slogan and a picture of his face.

Assange’s partner Stella Moris, who has two children with him, was in court after visiting Downing Street in a bid to deliver a Reporters Without Borders petition against the extradition, which has been signed by around 80,000 people.

The extradition case was delayed due to the coronavirus pandemic in May.

Dozens of witnesses are expected to be called to give evidence over four weeks, with the judgment likely to be delivered at a later date.

Assange has been held on remand in Belmarsh Prison since last September after serving a 50-week jail sentence for breaching his bail conditions while he was in the Ecuadorian embassy in London for almost seven years.