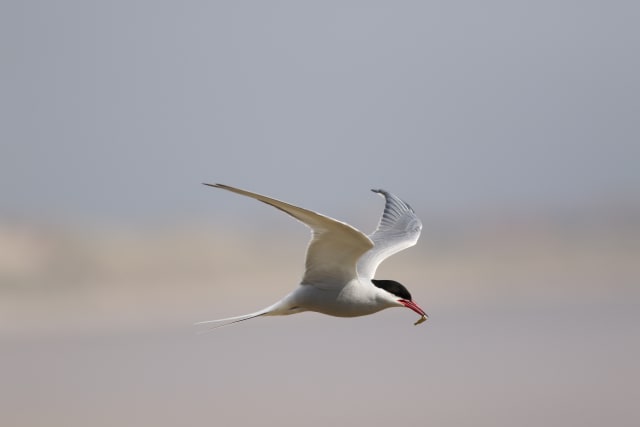 Arctic terns have failed to fledge chicks at one of their largest UK breeding sites this year, the National Trust said.

Extreme weather hit the breeding season at Long Nanny in Northumberland, while lockdown hampered conservation efforts, according to the Trust, which looks after the coastal site.

Arctic terns have the world’s longest migration route, returning from Antarctica each year to nest in places such as Long Nanny, where they have been breeding since 1980.

In recent years the birds have been watched over 24 hours a day by a team of five rangers and seven volunteers, and in 2019, more than 400 chicks fledged from nests at the site.

But hopes 2020 would be another good year – after a sand spit formed to the south of the estuary that was expected to provide defence against high tides for the ground-nesting birds – have been dashed, the trust said.

The conservation charity said the breeding season was hit by exceptionally high tides in June, made worse by strong onshore winds, which washed away half the nests.

Many of the remaining nests were preyed on by rats and stoats as rangers were unable to provide their usual round-the-clock care due to travel restrictions imposed by lockdown, the trust said.

By the end of June, the remaining Arctic terns started to desert their nests at dusk, which the National Trust rangers believe was due to predators and people walking through the colony, disturbing the birds.

The organisation said a loose dog was thought to be the final straw for the seabirds, causing them to desert the site entirely.

It is the first time since Arctic terns started breeding at Long Nanny in 1980 that no chicks have fledged.

Little terns, one of the UK’s smallest seabirds, which has seen serious declines since the 1980s, fared better, with up to six chicks taking to the wing to begin their migration to West Africa.

Countryside manager Gwen Potter said: “Lockdown made our conservation work with the terns so much more difficult this year, but the team did everything they could within the restrictions.

“It has been really sad to see our Arctic terns abandon the site, but we’re hopeful they’ll be back next year.

“They are an amazingly hardy species, with an epic migration, but as ground-nesting birds they’re also extremely vulnerable.

“It goes to show how important this conservation work is in protecting our declining species.”

She also said the little terns were able to take advantage of the absence of people in April and May at the site, due to lockdown, to breed and raise their young.

But there have been far more rats in the countryside during the pandemic, she suggested, as the rodents moved out of nearby urban areas while less food sources were available there, and preyed on the terns.