Raab: Trade deal is there for the taking but it is up to EU 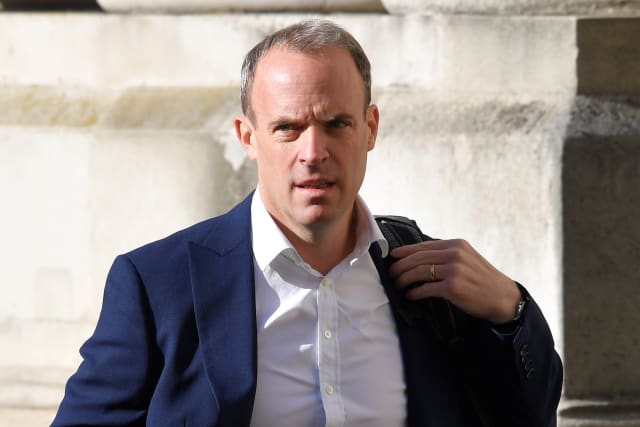 Foreign Secretary Dominic Raab said a trade deal with Brussels is “there for the taking” as the Government looked to step up pressure on the European Union to give way on the remaining sticking points.

Mr Raab said the negotiations had been “boiled down to two outstanding bones of contention” – control of UK fishing waters and taxpayer support for businesses – and urged the EU to come to an agreement.

His comments followed an interview in the Mail on Sunday (MoS) with Lord (David) Frost in which he said the Government was not “scared” of walking away from the talks without a deal – sentiments echoed by Mr Raab.

Lord Frost is due to hold another round of key negotiations in London with the EU’s chief negotiator, Michel Barnier, this week as they look to agree terms before the autumn in order to have a deal signed off when the transition period comes to an end on December 31.

Mr Raab, speaking to Sky News’ Sophy Ridge On Sunday programme, said the UK could not accept being controlled by the bloc’s state aid rules after Brexit, and accused the EU of “double standards” in its attempt to have Britain agree to terms beyond those in free trade agreements it has ratified in the past.

“We’ve actually got the issues boiled down to two outstanding bones of contention,” he said.

“There is a good deal there for the EU; we’d love to do that free trade agreement – and if not, we’ll fall back on Australian-style rules.

“I think this week is an important moment for the EU to really effectively recognise that those two point of principles are not something we can just haggle away – they are the very reasons we are leaving the EU, but we want a positive relationship and the arm of friendship and goodwill is extended.

“It is up to the EU to decide whether they want to reciprocate.”

In an interview with BBC One’s Andrew Marr Show, he described a deal as “win-win” and argued that it would avoid the “damaging impacts” of a no-deal fallout on both sides of the Channel.

Lord Frost had a similar message as he and Mr Barnier prepare to enter the final phase of their negotiations on trade when formal discussions resume on Tuesday.

He said the UK is preparing to leave after the transition period “come what may”, even if that means exiting with no-deal – which officials have dubbed a so-called “Australian-style” arrangement – and that it would not be a “client state” to the EU.

“I don’t think that we are scared of this at all. We want to get back the powers to control our borders and that is the most important thing,” Lord Frost told the MoS.

“If we can reach an agreement that regulates trade like Canada’s, great. If we can’t, it will be an Australian-like trading agreement and we are fully ready for that.”

Sir Ed Davey, leader of the Liberal Democrats, was critical of the approach and said a failed outcome would be a “disaster” for the country.

He told Sophy Ridge: “I do feel the Government is being very reckless and risky.

“This recession due to Covid, some people say, may be the worst and the deepest recession for 300 years and, in that context, the idea of a no-deal Brexit on top of the Covid recession, I think, would be a disaster for people’s jobs, for livelihoods, for businesses up and down the country.”

The former cabinet minister said he wants the country to have a close relationship with Europe but that talks of his party campaigning to rejoin the EU at the next election under his leadership is “for the birds”.