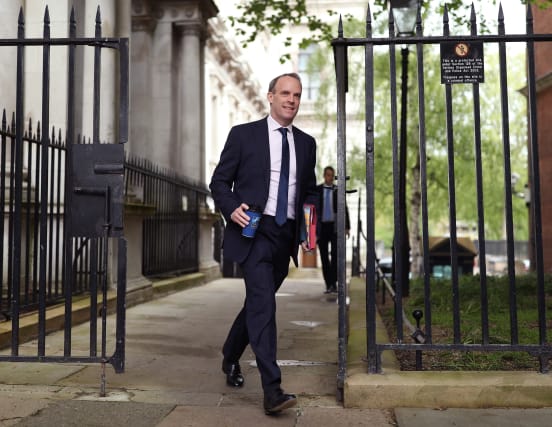 The alleged Novichok poisoning of Kremlin critic Alexei Navalny has all the hallmarks of Russian state involvement, Dominic Raab has said.

In the clearest indication yet that the UK Government suspects Moscow’s involvement in the incident, the Foreign Secretary said it is “very difficult to come up with a plausible alternative explanation” other than Russian influence, given its historical use of the chemical weapon.

Novichok, which means newcomer in Russian, was developed by the Soviet Union in the 1970s as a new kind of chemical weapon which would be harder to detect, more potent than existing nerve agents, and exempt from the Chemical Weapons Treaty.

The UK and Germany, where opposition leader Mr Navalny is being treated, are united on the need for Russia to explain what happened following talks between Mr Raab and German Foreign Minister Heiko Maas on Thursday.

The Cabinet minister, asked whether he thought the Russian state poisoned Mr Navalny, told BBC One’s Andrew Marr Show on Sunday: “I think it’s very difficult to come up with a plausible alternative explanation based on Russia’s track record of using it – Salisbury – based on the difficulty of getting hold of, let alone deploying Novichok as it’s such a dangerous substance.

“As I said, the case to answer is there for Russia and we need, I think, through the OPCW (Organisation for the Prohibition of Chemical Weapons), an investigation, and Russia needs to co-operate fully.

“What’s clear also is that it can’t just say ‘This is a domestic issue, it is just our internal affairs’.

“The use of chemical weapons in this kind of context is pure gangsterism and Russia does have responsibility never to use it as a government, and second of all to make sure no-one else can use it within its territory.”

Mr Raab said the “emphasis” at present is on ensuring “Russia is held to account” in any OPCW investigation before any further UK sanctions are considered, such as those seen in the aftermath of the Salisbury attack.

In response, Boris Johnson, as foreign secretary, helped corral a wave of expulsions of Russian diplomats across the EU and US after Britain told 23 envoys to leave.

Mr Skripal and his daughter Yulia were two of five people exposed to the substance, both spending weeks in hospital recovering.

But Dawn Sturgess, 44, of Amesbury, Wiltshire, died in July that year after coming into contact with a perfume bottle thought to originally contain the poison, while her partner, Charlie Rowley, spent nearly three weeks in hospital.

Germany, meanwhile, has stepped up the pressure on Russian President Vladimir Putin over the poisoning of Mr Navalny, warning that a lack of support in Moscow for an investigation could “force” Berlin to rethink the fate of a German-Russian gas pipeline project.

Foreign Minister Mr Maas told weekly newspaper Bild am Sonntag: “I hope the Russians won’t force us to change our position regarding the Nord Stream 2 pipeline being built under the Baltic Sea.”