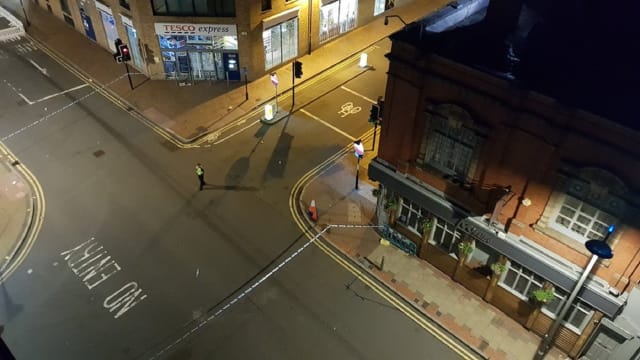 Multiple people have been injured and a major incident declared after a series of stabbings in Birmingham.

Police and paramedics were called to reports of a knife attack in the early hours of Sunday, with further stabbings then being reported.

One witness told BBC Radio 5 Live that the attack seemed like "one group of boys against another group of boys".

West Midlands Police said there were "a number" of victims, but the severity of their injuries was not immediately known.

The force denied reports of gunshots being fired, and added "it would not be appropriate to speculate on the causes of the incident".

A witness, Cara, told 5 Live she had heard racial slurs during the incident, adding that it was a "multicultural night" in the clubs near the Arcadian Centre.

She added: "They were not just having an argument and then fighting, it was straight into fists being thrown. There was not much talking going on.

"Drinks were being dropped, bottles that they had obviously bought in the club, rings were falling off so jewellery was going everywhere, clothes were being torn.

"One of the males actually ended up with his hair being pulled out and left with a bald patch."

Police said the response would be ongoing "for some time" and urged people to stay away from the area.

The force added: "We are aware of a number of injured people, but at the moment we are not in a position to say how many or how serious.

"However, all emergency services are working together at the scene, and making sure that those who are injured receive medical care.

"Work is still going on to establish what has happened, and could take some time before we are in a position to confirm anything."