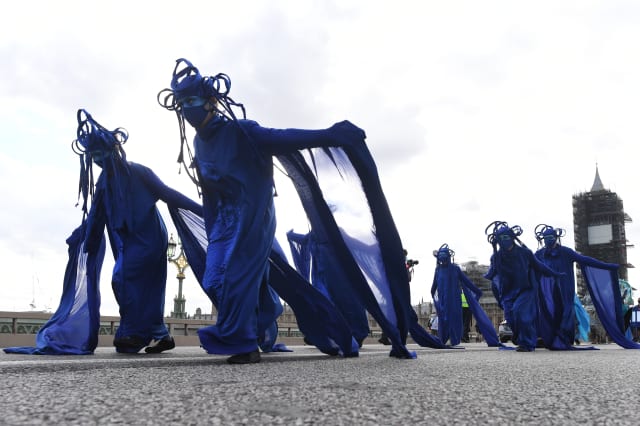 Members of the public appeared bemused as the procession moved past crowds along the South Bank on Sunday, having started at Parliament Square.

The Marine Extinction March saw campaigners carry dead sea life props, flags and banners, to highlight what XR said was the destruction of the world’s oceans.

The procession was led by a group of dancers wearing blue gowns to represent the sea, and a man dressed only in swimwear, a yellow hat and trainers.

Earlier on Sunday, about 100 demonstrators met at Gabriel’s Wharf to raise awareness about the impact of climate change and how it could lead to more extreme weather and flooding.

Jan O’Malley, 74, from Clapham in south-west London, joined the march at Parliament Square.

She told the PA news agency: “I’m taking part because I have grandchildren, and they will soon have their own children, and I’m really worried about the impact on our future generations.

“The Government has declared a climate emergency, but they are not taking enough action fast enough.”

The latest protest comes as demonstrators blocked the delivery of some of the UK’s major newspapers earlier in the weekend.

Some newsagents’ shelves were left empty on Saturday after campaigners targeted Newsprinters’ printing works at Broxbourne in Hertfordshire and Knowsley, near Liverpool, overnight.

Merseyside Police said they had since charged 26 people with aggravated trespass following a demonstration at the “News International premises” in Knowsley on Friday night.

Police said all 26 have been granted bail under the condition they do not enter Merseyside or contact any News International employees.

More than 100 demonstrators used vehicles and bamboo lock-ons to block roads outside the Newsprinters works on Friday, with both protests continuing until Saturday.

The blockade prevented delivery vans from leaving presses which publish the Rupert Murdoch-owned News Corp titles including The Sun, The Times, The Sun On Sunday and The Sunday Times, as well as The Daily Telegraph and Sunday Telegraph, the Daily Mail and Mail On Sunday.

Hertfordshire Police said they had taken 50 people into custody.

XR apologised to newsagents for the disruption but added it would not apologise to Mr Murdoch, calling on him to “stop suppressing the truth about the climate crisis and profiting from the division your papers create”.