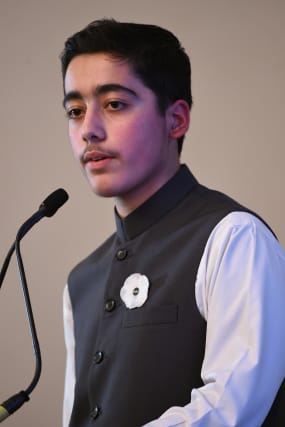 A teenager who was shot by a Taliban gunman during a terrorist attack at his school in Pakistan has won a place at the University of Oxford.

Ahmad Nawaz was just 14 when terrorists burst into the Army Public School in Peshawar and massacred around 150 children and teachers.

Mr Nawaz was shot in his upper left arm and survived by pretending to be dead, but his younger brother Haris was killed in the December 2014 attack.

After being flown to Birmingham for treatment, he remained in the UK and is now set to study philosophy and theology at Oxford.

Mr Nawaz, now aged 19, told The Times: “When the terrorists came to attack children in school they wanted to stop people being educated.

“The fact I’ve got into one of the best universities in the world sends them the message that they can’t do those kind of atrocities and stop us from reaching new places.”

Mr Nawaz will be following in the footsteps of Malala Yousafzai, who recently completed her philosophy, politics and economics degree at Oxford.

The 23-year-old was shot in the head by a Taliban gunman at the age of 15 after campaigning for girls to be educated in her native Pakistan.

Mr Nawaz has been accepted at Lady Margaret Hall – the same college Ms Yousafzai just graduated from, The Times reported.

Speaking about the attack, Mr Nawaz said he was with hundreds of other pupils gathered in the school’s hall for an assembly on first aid.

He said the gunmen were shooting people “one by one” and were working their way down the rows of students towards him.

“I was lying on the floor face down and as I looked up (I saw) he had shot my friend and I realised it was my turn,” Mr Nawaz told The Times.

“He held the gun half a metre away from me and pointed it at my head, but at the moment he was going to shoot I flinched to my right and I got shot in my upper arm.”

He said the gunman moved on to the next person and started shooting.

Mr Nawaz, who now lives in Birmingham, said: “Survival instinct kicking in, I thought if I did make a movement or a noise I was going to die.”

He was later rescued from the school, but lost consciousness by the time he arrived at hospital having lost so much blood.

Mr Nawaz said hearing that his brother, who was a year younger, had died was the “most painful time” as they were both very close.

He had six operations on his arm at a hospital in Peshawar before being transferred to the Queen Elizabeth Hospital in Birmingham to save it from amputation.

Mr Nawaz arrived in the UK with his family two months after the attack, and his arm was rebuilt.

Since then, he has gone on to receive various humanitarian awards for speaking out against youth radicalisation and promoting the right to an education for all children.