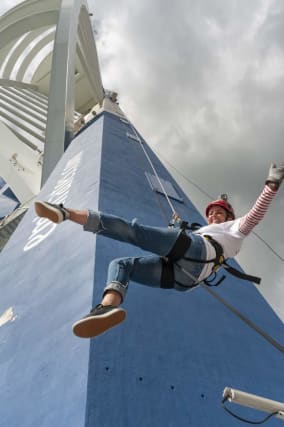 A social media influencer has completed a 170-metre abseil down Portsmouth’s Spinnaker Tower to raise money for blood cancer charity DKMS, which has helped her husband battle the disease.

Daredevil mother Sally Hurman, from Surrey, embarked on the feat as part of a two-year fundraising campaign and to coincide with Blood Cancer Awareness Month in September.

The 49-year-old mother-of three, known on social media by her handle Getting Stuff Done in Heels, has worked to raise awareness for the DKMS since early 2018 following her husband Gavin’s fight against blood cancer.

She said: “I really wanted to do something special to mark Blood Cancer Awareness Month. It’s such an important date for people with blood cancer and for DKMS.

“A few years ago I’d have never considered myself a daredevil, but after seeing firsthand the bravery shown by Gavin and others with blood cancer, finding the guts to abseil the Spinnaker Tower didn’t seem like such a tall order after all.”

She added: “If I’m honest I was both terrified and excited at the same time.

“I don’t recall much of the beautiful harbour because my eyes were closed a lot of the time, but I drew strength from the thousands of blood cancer patients fighting for a second chance of life and completed the abseil.

“I’m donating all funds to DKMS because they do such important work registering donors.”

Caroline Richardson, head of fundraising at DKMS, said: “So many charities have taken a huge hit in terms of their income this year due to the coronavirus pandemic.

“We are no different at DKMS. In fact, this year’s fundraising figures at are down by almost 50% compared to last year, which could prove detrimental to so many of our patients.

“We’re thrilled Sally has continued to raise vital funds for DKMS as well as using her social media platform to shine a light on the work we do and on Blood Cancer Awareness Month (September).

“She’s a great ambassador for our cause and she demonstrates that people can get involved with DKMS in several ways, whether it’s signing up to be a lifesaver-in-waiting, volunteering or fundraising for our lifesaving work – you can always help us to fight blood cancer.”

DKMS has registered nearly 10 million potential blood stem cell donors worldwide including 697,000 and helped to provide 1,130 people with a donor.