Nine arrested as police clash with anti-migrant protesters in Dover 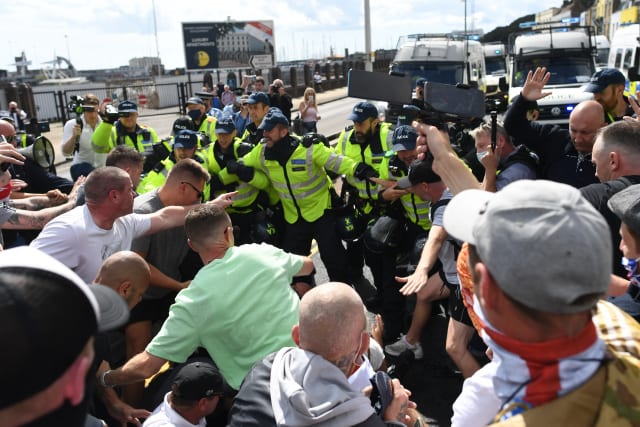 Clashes between anti-migrant demonstrators and police broke out during a day of protests in Dover.

Protesters brought traffic on a busy dual carriageway to a standstill for more than an hour while they marched and sang Rule, Britannia.

At least nine people were arrested, including for racially aggravated public order, violent disorder and assaulting an emergency worker.

Earlier in the day anti-racism activists gathered to stand in solidarity with people making the dangerous Channel crossing.

Demonstrations both against and in support of migrant arrivals took place amid a heavy police presence on what was a sunny day in the Kent port.

Officers were drafted in from as far afield as Norfolk to help maintain order, the PA news agency understands.

Dozens of anti-migrant protesters assembled on Dover seafront on Saturday before marching towards the harbour.

Many wore Union Jack face coverings and carried flags, while others had banners criticising the UK’s immigration policy.

Some shouted “freedom” and “get these scum off our streets” as they moved along the seafront.

As they emerged on to the A20, a vital artery for trade vehicles entering and leaving the port, they were met by at least 100 officers.

The group’s march blocked the busy road for more than an hour, with cars and lorries grinding to a halt as the group moved towards the town centre.

Several police officers were seen restraining one person and pinning them to the ground.

There were other sporadic clashes between the anti-migrant protesters and police as the line of officers pushed them towards the junction with York Street.

Officers on horseback were among dozens squeezing the protesters along the A20 and then up towards the railway station, where the last of the anti-migrant crowd dispersed.

Kent Police said they had made at least nine arrests, including for racially aggravated public order, violent disorder and assaulting an emergency worker.

Inquiries are under way to identify any further offences, the force said.

Earlier a group of about 100 people gathered to stand in solidarity with migrants.

Organised by Kent Anti Racism Network, the crowd assembled in Market Square to listen to speeches.

Addressing a crowd of about 100, Peter Keenan from Kent Refugee Help said that when society sees people who are fleeing war and turns them away “that says something about the state of your society”.

He continued: “We are not those people. We are standing up and welcoming people who are in desperate circumstances fleeing from awful situations.”

The total number of migrants who have crossed the sea to Britain in 2020 is now more than 5,600, analysis by the PA news agency shows.

Migrant aid charity Care4Calais said: “Sadly our fears that far-right protesters might bring disruption to the area were real.

“But their narrative of hatred and fear had no place in Dover. They were outnumbered. So many more people turned up to show their unwavering support for those who, out of desperation, are forced to make dangerous journeys across the Channel.”

Also on Saturday, the Home Office announced that three people who tried to smuggle an Afghan family of five into the UK hidden in a van have been jailed for a total of more than seven years.

Home Secretary Priti Patel said: “We will not tolerate people smuggling in any form, and are doing all we can to tackle those responsible for this appalling trade.

“This was a reckless attempt to circumvent our border controls and anyone in doubt about the consequences of such actions should take note – you will be caught and put behind bars.”

On Friday night the words “Rise above fear. Refugees welcome” were beamed on to the White Cliffs of Dover by humanitarian charity Freedom From Torture.

Other messages used to light up the landmark included “These cliffs mean hope” and tributes to Syrian boy Alan Kurdi on the fifth anniversary of his death in the Mediterranean Sea.