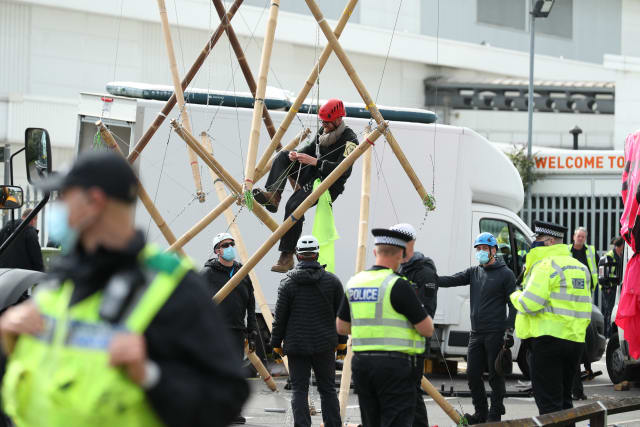 Prime Minister Boris Johnson has branded an environmental protest at printing presses for some of the UK’s major newspapers “completely unacceptable”.

Mr Johnson joined in criticism of Extinction Rebellion from across the political divide, claiming a free press was “vital” to the fight against climate change.

More than 100 Extinction Rebellion (XR) protesters used vehicles and bamboo lock-ons to block roads outside the Newsprinters printing works at Broxbourne, Hertfordshire, and Knowsley, near Liverpool on Friday night.

By Saturday morning, police said some 72 people had been arrested during the action, which delayed deliveries of papers to newsagents on Saturday morning. The demonstrations ended shortly after 11am and the lock-ons were dismantled.

The Newsprinters presses publish the Rupert Murdoch-owned News Corp’s titles including The Sun, The Times, The Sun On Sunday and The Sunday Times, as well as The Daily Telegraph and Sunday Telegraph, the Daily Mail and Mail On Sunday, and the London Evening Standard.

Extinction Rebellion apologised to newsagents and customers for the disruption but added it would “not apologise to Mr Murdoch for disrupting his agenda” and claimed the free press was “under attack from a failing authoritarian government”.

Writing on Twitter, Mr Johnson said: “A free press is vital in holding the government and other powerful institutions to account on issues critical for the future of our country, including the fight against climate change.

“It is completely unacceptable to seek to limit the public’s access to news in this way.”

Home Secretary Priti Patel added: “This morning people across the country will be prevented from reading their newspaper because of the actions of Extinction Rebellion.

“This attack on our free press, society and democracy is completely unacceptable.”

Meanwhile, Labour’s shadow international trade secretary Emily Thornberry told Times Radio on Saturday morning: “This is very worrying and I don’t really know what it is that is expected to be achieved and I know that for many older listeners it’s very much part of their daily life, getting their paper delivered in the morning, and I just think it’s wrong.”

On Twitter, Extinction Rebellion said: “Let’s not get distracted. Our free press, society & democracy IS under attack – from a failing authoritarian govt leading us to a catastrophic 4 degrees of warming.”

The group added: “If you can’t get your paper this morning, it’s because we are in rebellion against Government inaction on the climate and ecological emergency. People are dying, and soon we won’t be able to feed our children.”

The Federation of Independent Retailers (NFRN) said the protests had hit home delivery operations, including for the “elderly and vulnerable”, with its members having to deal with “angry customers”.

National president Stuart Reddish said: “Newsagents have played a critical role during Covid-19 in getting newspapers into the hands of readers and this is not helpful at a time when every sale counts.”

Ian Murray, executive director of the Society of Editors, added: “Everyone has the right to peacefully protest and make their voices heard, after all that is what a free press is all about. But it is not acceptable for those who wish only their voices to be heard to attempt to silence others.”

Hertfordshire Police earlier said delivery lorries had not left the Broxbourne site as of 6am on Saturday.

Shortly before 10am, it said 42 people had been arrested, with more expected.

Newsprinters condemned the protests as an “attack on all of the free press” which had affected workers going about their jobs, and others such as newsagents who face a “financial penalty”.

The company said it had transferred printing to other sites, but that delays would occur in some deliveries of The Sun, The Times, the Daily Mail, the Daily Telegraph and the Financial Times.

He said: “Protesters ignored our requests to move location, so we have taken robust action to enable the roads to be reopened and to remove the protesters causing obstructions.”

Merseyside Police tweeted on Saturday morning that 30 people had been arrested at the Knowsley plant, with two vans and a boat causing an obstruction being removed.