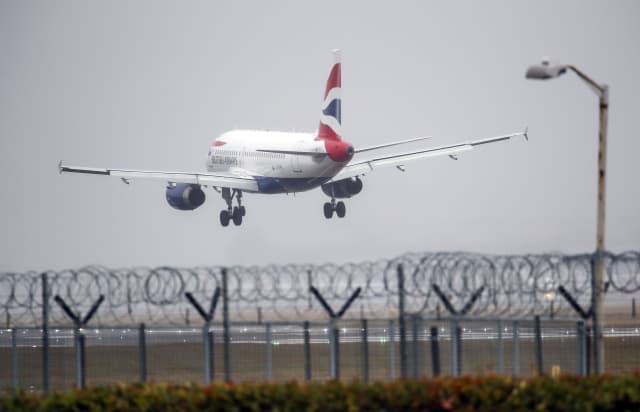 A review of airport slot allocation will form part of a five-year recovery plan for the aviation industry, the Department for Transport (DfT) has announced.

Ministers want to ensure the process “encourages competition and provides the connectivity that UK consumers need”, the department said.

The DfT made the comment in its response to a report by the Commons’ Transport Select Committee into the impact of the coronavirus pandemic on aviation, which urged the Government to “explore every avenue available” to guarantee slot rules “do not unfairly impact passengers”.

This came after more than 100 MPs backed union calls for British Airways to be stripped of some of its valuable slots at Heathrow due to the treatment of its workforce.

Slots – which give an airline the right to take off and land at an airport – can be worth million of pounds each and are generally allocated to incumbent airlines.

British Airways, which holds the majority at Heathrow, announced a plan to cut up to 12,000 jobs in April.

Unions claimed it operated a “fire and rehire” system which saw many remaining employees having their terms and conditions downgraded.

The carrier insisted it tried to “protect as many jobs as possible”.

The DfT said it will “consider the role of the slot system” as part of a recovery plan to be published this autumn but noted it is “legally prevented from intervening” in the allocation process.

The overall strategy will be “broad in scope” and devised “in the context of the Government’s green ambitions”, the DfT said.

It is expected to cover issues such as: how the industry can return to growth; workers and skills; consumer protection; and climate change.

The DfT did not engage with the committee’s recommendations for health screening at airports or common international health standards as a way of reducing quarantine restrictions.

Committee chairman Huw Merriman said: “The publication of an aviation recovery plan is welcome but it cannot come quick enough for a sector devastated by the impact of coronavirus.

“Our report expressed a desire to see more pace and detail on Government action to address the crisis. We await the Government’s aviation recovery plan and will look carefully at how Government intends to deal with some of the specific points in our report.

“The Government’s quarantine regime, coupled by a refusal to endorse airport testing to reduce the quarantine period, adds further barriers to travel.

“Whilst the Government’s approach can be argued for on health grounds, it also further justifies the committee’s original call for the Government to provide a sector deal to support our ailing aviation industry and its workforce.”