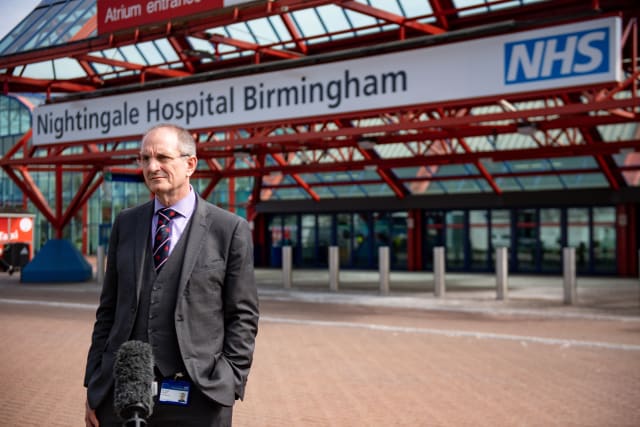 The head of England’s biggest NHS hospital trust says there is “absolutely no scientific evidence” Covid-19 is weaker than it was at the pandemic’s peak, as he warned against complacency.

Dr David Rosser, of University Hospitals Birmingham NHS Trust, said rumours the virus had significantly “mutated” into a less virulent form were incorrect and medics were “deeply concerned” about an increase in hospital admissions.

His warning was echoed by a public health official in the West Midlands, who said matters were at a “pivotal moment” in the fight against Covid-19.

Earlier, Dr Rosser said the virus appeared no less deadly than it had been in the days when the pandemic peaked.

With reference to six patients who had come on to the trust’s intensive care units over the past week, he said two had died – including a 29-year-old.

Public health officials have become increasingly worried about an increasing infection rate in younger people across the region.

Dr Rosser said the deaths equated to the same intensive care mortality rate of 33% seen during the peak in March to early May.

But he added the caveat that six patients was a small sample size from which to extract any useful data.

Charting the picture at the trust, which includes the vast Birmingham Queen Elizabeth Hospital, Dr Rosser said there had been an uptick in patients being admitted with Covid-19.

He added the numbers were in line with an expected “lag” of ten days to two weeks for people to develop symptoms of serious illness, from when cases in the community across the Midlands began rising and triggered fears of local lockdowns in Birmingham and neighbouring Sandwell.

Warning against complacency, Dr Rosser said: “There’s been lots of talk about the increase we see in the community not coming through to the hospital – well, we are beginning to see that.

“We have actually had two people, one of them sadly only 29 years old, die in the last week of Covid.

He added: “While it is nothing like it was back in the spring, we’re pretty worried about where it is all going.”

At its height, the trust had 175 people on ventilators in intensive care.

Dr Rosser said: “One thing there is clear scientific evidence for, going by what the experts at our trust tell me, is the virus has not significantly mutated.

“It is essentially the same virus as we had.

“There’s a lot of rumours and speculation going around the virus has weakened.

“There is absolutely no scientific evidence that that is the case.”

He said a “combination” of factors was one answer as to why there had not been a second rapid wave of hospital admissions and deaths, but that medics were now “concerned” at previous weeks’ rises in community infection rates.

Dr Rosser said younger people, among whom infections have been rising, had a “lower risk profile”, meaning they were less likely to get seriously ill with Covid-19, while more vulnerable groups like pensioners, were continuing to shield and take safeguarding measures, which could partly explain the issue.

He added that there had been 15 new admissions to the trust’s hospitals in the last week, following previous weeks where there had been no patients at all in its ITUs.

Dr Rosser said: “It’s not unexpected that we are seeing deaths coming through now, some weeks after we saw worrying rises in cases on the street.

“The problem is people – hearing flashes of headlines on the news and who don’t live and breathe it – find it instinctively difficult to link those two things.

“You have a rise in cases and then for some weeks you don’t have many deaths.

“It leads to speculation the virus is going to be less of a problem, second time around.

He added: “The vast majority of people in acute healthcare have been extremely concerned about this rise in cases for some weeks.”