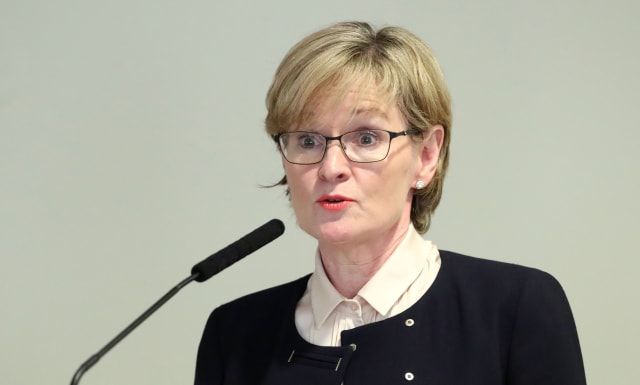 Ireland has proposed a long-standing MEP and a senior banker as its two candidates to become the country’s next EU Commissioner.

European Commission President Ursula von der Leyen said she will interview the nominees next week ahead of the successful candidate being formally appointed by the European Council.

Mr McDowell is a former adviser to the Fine Gael party while Mrs McGuinness has served as a Fine Gael MEP since 2004.

Mr Hogan quit last month amid controversy surrounding his attendance at a golf event in Co Galway and his prior movements around the island when he was supposed to be self-isolating under travel quarantine guidelines.

He had been the EU’s commissioner for trade and had been expected to play a key role in negotiating the post-Brexit deal with the UK.

It has not been decided what portfolio Ireland’s next commissioner will be handed.

Mr Hogan was one of around 80 people who attended a parliamentary golf society dinner in Clifden last month.

The attendees were accused of disregarding coronavirus restrictions limiting the number of people able to gather indoors. The controversy resulted in a series of political casualties, with agriculture minister Dara Calleary also resigning.

Mr Hogan initially refused to quit but pressure increased on him after it emerged he had also undertaken extensive travel around Ireland during in a two-week period after his return to the island from Brussels. Travellers entering the country from Belgium were required to quarantine for 14 days.

Cabinet ministers discussed and agreed the nominations on Friday.

A Government statement said: “The Government believes that both are candidates of the highest calibre, possessing the necessary competence, independence and European commitment to serve in the role of Commissioner with distinction.

“In keeping with the provisions of the European Treaties, President von der Leyen will now consult with the European Parliament before the appointment of a new Commissioner is made by the Council, in common accord with the President of the Commission.

“The question of the allocation of roles within the Commission is also one for President von der Leyen. However, the Government firmly believes that both candidates have demonstrated that they have experience, skills and capacity to serve and to make a contribution in the most demanding roles.”

Ms von der Leyen tweeted: “The Taoiseach @MichealMartinTD has informed me of the nomination of @MaireadMcGMEP and @AMcDowell as the Irish candidates for the post of commissioner. I will interview them early next week on their qualifications for the job.”