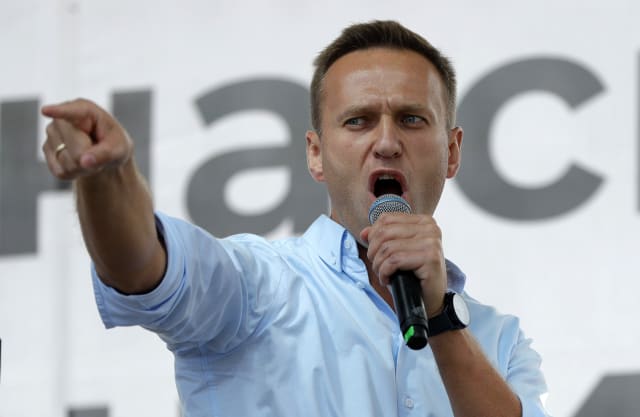 Downing Street has increased pressure on Russia in warning there will be “severe consequences” for the people behind the alleged Novichok poisoning of Kremlin critic Alexei Navalny.

Foreign Secretary Dominic Raab has urged Moscow to come clean over the attack and will discuss what actions to take with his German counterpart on Thursday, with No 10 not ruling out sanctions or fresh expulsions of diplomats.

Boris Johnson has described the suspected deployment of the same chemical weapon used in the 2018 Salisbury poisonings as “outrageous” and vowed to ensure “justice is done”.

“We are committed to working with Germany, allies and international partners to demonstrate that there are severe consequences to the use of banned chemical weapons,” the spokesman said.

Pressed on whether sanctions could be imposed on Russia or diplomats expelled, the spokesman did not explicitly blame Moscow and said he would not “pre-empt what might happen next”.

He said the Organisation for the Prohibition of Chemical Weapons would play a key role in investigating what he described as an “attempted murder” and said the UK had offered support to the German investigation.

Mr Johnson and his Foreign Secretary also met US President Donald Trump’s senior adviser Jared Kushner and, although the conversation was centred on the Middle East, it was likely Mr Navalny was discussed.

The opposition politician and corruption investigator fell ill on a flight back to Moscow from Siberia on August 20 before being transferred to Berlin. The 44-year-old remains on a ventilator in intensive care.

On Wednesday, German Chancellor Angela Merkel said Mr Navalny was the victim of “attempted murder by poisoning” with Novichok and added that the aim was to “silence” the opponent of Russian President Vladimir Putin.

Britain has long accused Russian operatives of using the Soviet-era poison on Sergei Skripal, the former double agent targeted in the 2018 attack in Salisbury, Wiltshire.

In response, Mr Johnson as foreign secretary helped corral a wave of expulsions of Russian diplomats across the EU and US after Britain told 23 envoys to leave.

Mr Skripal and daughter Yulia were two of five people exposed to the substance in Wiltshire, both spending weeks in hospital recovering.

But Dawn Sturgess, 44, of Amesbury, Wiltshire, died in July that year after coming into contact with a perfume bottle thought to originally contain the poison, while her partner Charlie Rowley spent nearly three weeks in hospital.

Wiltshire Police Detective Sergeant Nick Bailey was also exposed to the substance while responding to the attack, and almost died.

Sharing Mr Johnson’s tweet calling for justice, the officer said: “I have so much that I want to say about this tweet. But I can’t, and I won’t.”

The Prime Minister’s spokesman again urged the suspects – two alleged agents from the GRU military intelligence service – to return to the UK to face justice.

Mr Raab has said Russia has “a clear case to answer” over Mr Navalny’s poisoning, with tensions between the UK and Russia already high after Britain accused Moscow of trying to interfere in the 2019 general election.