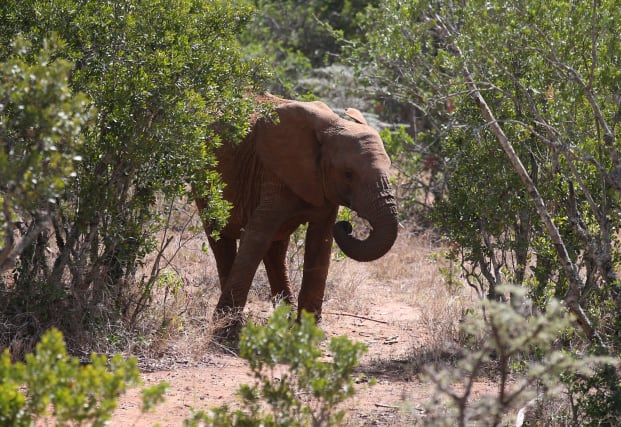 The oldest bull elephants in all-male groups are most likely to hold leading positions when travelling, according to a new study.

Researchers from the University of Exeter believe this is so the older elephants can help younger, less experienced males in the group find food and water.

They say their findings challenge the justification by trophy hunters that older bull elephants can be targeted as they are redundant in terms of breeding and therefore the survival of the species.

Lead author Connie Allen, of the University of Exeter’s Centre for Research in Animal Behaviour, said: “Our results challenge the assumption that older male elephants are redundant in the population and raise concerns over the removal of old bulls that currently occurs in both legal trophy hunting and illegal poaching.

“We argue that selective hunting of old bulls is not sustainable.”

Previous research has shown that old bulls are the prime breeders, meaning they sire the most offspring, in African elephants.

“Our findings suggest that killing them could also have detrimental effects on wider elephant society through loss of leaders who help young, newly independent males navigate in unfamiliar, risky environments,” she added.

Pre-adolescent male African savannah elephants live in herds led by females but they leave these between the ages of 10 to 20 and spend most of their time in all-male groups.

It found the probability of leadership – measured by which elephant walked at the front of travelling groups – increased with age.

Professor Darren Croft, of the University of Exeter, said: “Research on benefits of older individuals in long-lived social mammals has largely focused on females in matrilineal societies where, for example, older female elephants are most effective at making decisions crucial to herd survival, and old post-reproductive female killer whales lead collective movements in hunting grounds.

“In contrast, less is known about the role of older males as leaders in long-lived social species.

“Our study suggests that bull elephants occupy a similar leadership role in male elephant society as old female matriarchs in breeding herds – and so they may require equal protection.”

Poaching, hunting and conflict with humans are the main causes of death among mature bull elephants and their numbers are declining.

They are usually targeted by trophy hunters as they have larger tusks, and minimum ages are often implemented by hunting operators.

Botswana has recently announced a decision to re-start elephant trophy hunting, and export quotas for the tusks of 400 elephants have been issued for this year.

Dr Kate Evans, director of Elephants for Africa, said: “The intricacies of male elephant societies have often been ignored in management and conservation decisions with the underlying assumption that once they leave their herd they are solitary and independent.

“This study furthers our understanding of male elephants and the importance of older bulls, enabling more sustainable management decisions for both male and female elephants to be made.”

The study was supported by the Leverhulme Trust, The Explorers Club, Wilderness Wildlife Trust, IDEAWILD and Elephants for Africa.

It is published in the journal Scientific Reports.