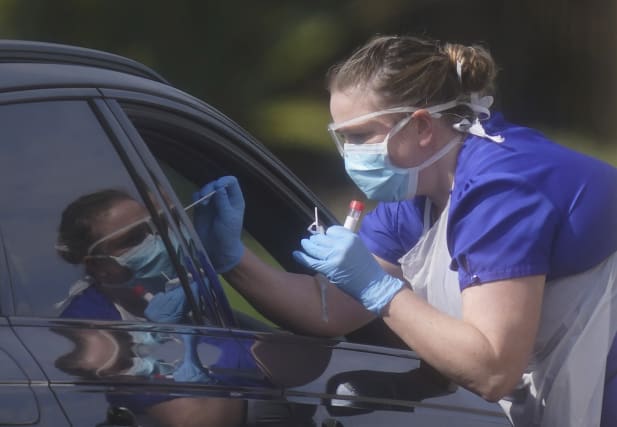 The number of close contacts of people who tested positive for Covid-19 being reached through Test and Trace is at its lowest since the system was launched, figures show.

The latest data also indicates that a total of 6,732 new people tested positive for Covid-19 in England in the week to August 26, an increase of 6% in positive cases on the previous week and the highest weekly number since the week to June 3.

The figures come as the system faces further criticism for a flaw in its online booking system which tries to direct people to test centres more than 100 miles away.

A senior source said a change would go live on Thursday or Friday restricting test centre locations to within 75 miles, and it is understood there are plans to improve the algorithm so that it suggests more suitable locations for people requesting tests.

Justin Madders, shadow health minister, described the latest figures as “hugely disappointing” and said there was “clearly a problem with testing infrastructure”.

New figures from the Department of Health and Social Care show that 69.4% of close contacts of people who tested positive for Covid-19 in England were reached through the Test and Trace system in the week ending August 26.

This is down from 77.1% in the previous week, and the lowest weekly percentage since Test and Trace was launched in May.

For cases handled by local health protection teams, 97.3% of contacts were reached and asked to self-isolate in the week to August 26.

By contrast, for those cases handled either online or by call centres, 59.8% of close contacts have been reached and asked to self-isolate.

Since the launch of Test and Trace, 270,559 close contacts of people who have tested positive for Covid-19 have now been reached through the tracing system and asked to self-isolate.

A total of 73,081 people who tested positive for Covid-19 in England have had their cases transferred to the system since its launch.

A further 1,755 people (2.4%) could not be reached because their communication details had not been provided.

The figures cover the period May 28 to August 26.

Health Secretary Matt Hancock defended the testing regime as working “well” despite some people being directed to centres more than 100 miles away.

He told Sky News that the issue was part of the reason why the Government was investing in trials of 20-minute Covid-19 tests.

Mr Hancock said: “At the moment the system works well. Of course there are operational challenges from time to time but it works well.

“And we’re finding a higher and higher proportion of people in the country who have coronavirus and getting them tests so they can be looked after.

“But absolutely we need to roll out more testing – we have done throughout this crisis and today’s another step in solving some of those problems with the existing technology.”

Mr Hancock told BBC Breakfast: “If you have symptoms, please come forward and get a test. It is straightforward, it is easy and the vast majority of people get one close to their home.”

The Health Secretary has announced a new £500 million funding package aimed at supporting trials of a 20-minute Covid-19 test and efforts to explore the benefits of repeatedly testing people for the virus.

Existing trials in Southampton and Hampshire, using a no-swab saliva test and a rapid 20-minute test, will also be expanded through the new funding.

Mr Hancock would not put a date on when mass testing may be rolled out nationwide, but said having a normal Christmas was dependent on it unless a vaccine was developed.

“I hope that if this mass testing regime comes off, if the new technologies we’re working so hard on work, or if we manage to get a vaccine before now and then, then I hope we can have a happy and loving Christmas that people yearn for,” he told BBC Radio 4’s Today programme.

Mr Madders said: “With cases on the increase and the Government pushing for everyone to return to work, it is more important than ever that test and trace is working to its potential.

“It is therefore hugely disappointing to see that the number of people the system reached went down again in the last week.

“There is also clearly a problem with testing infrastructure as people across the country are sent hundreds of miles for testing appointments.”