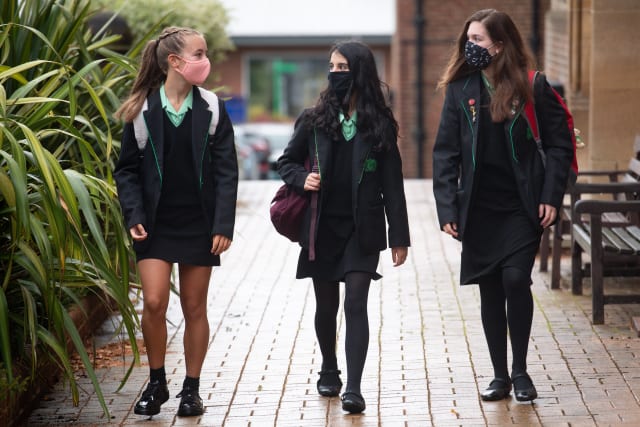 Hugging and kissing grandchildren after they come back from school may not be the "most sensible thing to do", a leading expert has warned.

Professor Russell Viner, president of the Royal College of Paediatrics and Child Health and a member of Sage, has urged caution against the scale of physical contact between older adults and children who are back at school.

Addressing a Royal Society of Medicine webinar, Professor Viner said: "I think if there are highly vulnerable clinically shielding grandparents and others, that actually full-on hugging and kissing your grandchildren after they come back from school may not be the most sensible way to behave.

"We don't believe in cutting off all physical contact between children and grandparents, but actually a lot of kissing and that kind of thing might not be the most sensible thing to do."

He added: "Keeping children seeing grandparents is important, making sure they wash their hands etc when they come out of school. Being sensible, being relatively secure, I think is the way forward."

When asked about the risks of children returning from school and then seeing their grandparents, Professor Viner said: "I very much understand the anxiety and particularly from families where grandparents or parents are clinically vulnerable and they have been shielding.

"This is also a particular issue I know for lots of multi-generational families from the BAME heritage."

Professor Viner added: "Clearly children can be asymptomatic, children can be infectious, clearly they can carry risk for adults, there is no pretence that they do not. The truth is that appears to be one of the least common ways that adults get infected."

Speaking at the same event, Amanda Spielman, chief inspector of Ofsted, called on schools to prioritise exercise for children as it can boost young people's mental health.

She said: "People seem to be paying far more attention to mental health than to physical which I find quite odd, given the importance of physical activity for children's well-being.

"I'd like to do what I can from where I sit to keep reminding people that the physical is important."

She added: "I am hoping that lots of schools will feel positively enthusiastic about getting children outside to exercise as much as possible."

Education Secretary Gavin Williamson said: "It is so encouraging to see schools opening their gates for the new term and I'm delighted that children are being reunited with their classmates and teachers."

He added: "More schools will continue to open to all pupils next week, following teacher training days and inductions for new year groups.

"It's vital that time is taken to fully settle into new routines and I am confident we have the right contingency plans to deal with any challenges."