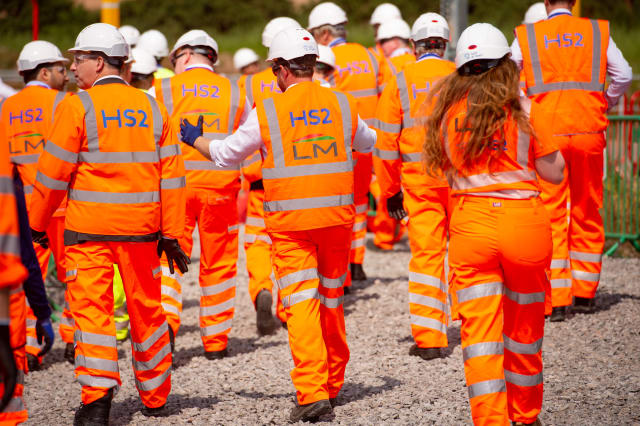 Construction of HS2 will formally start on Friday with a “shovels in the ground” moment.

HS2 Ltd, the Government-owned company building the scheme, would not disclose the location of Friday’s event, but it is believed the Prime Minister will attend.

Mr Johnson said: “HS2 is at the heart of our plans to build back better – and with construction now formally under way, it’s set to create around 22,000 new jobs.

“As the spine of our country’s transport network, the project will be vital in boosting connectivity between our towns and cities.”

The four main contractors for Phase One between London and the West Midlands will now switch from enabling works, scheme design and preparatory work to full construction.

Despite it running tens of billions of pounds over budget and several years behind schedule, the PM gave the green light for the railway in February 2020.

Two months’ later, ministers gave the go ahead for it to enter the construction phase.

He went on: “Shovels in the ground to deliver this new railway means thousands of jobs building the future of our country’s infrastructure.

“This fantastic moment is what leaders across the North and Midlands have called for – action to level up our country by boosting capacity on our railways, improving connections between our regions, and spreading prosperity.”

Construction will begin with the biggest engineering challenges – such as the stations and tunnels – followed by the main viaducts and bridges.

Most activity this year will be focused on HS2’s city centre stations and major construction compounds such as in Old Oak Common, west London and Calvert, Buckinghamshire.

HS2 Ltd chief executive Mark Thurston said: “This is a hugely exciting moment in the progress of HS2. After 10 years of development and preparatory work, today we can formally announce the start of full construction, unlocking thousands of jobs and supply chain opportunities across the project.

“We are already seeing the benefits that building HS2 is bringing to the UK economy in the short term, but it’s important to emphasise how transformative the railway will be for our country when operational.

“With the start of construction, the reality of high speed journeys joining up Britain’s biggest cities in the North and Midlands and using that connectivity to help level up the country has just moved a step closer.”