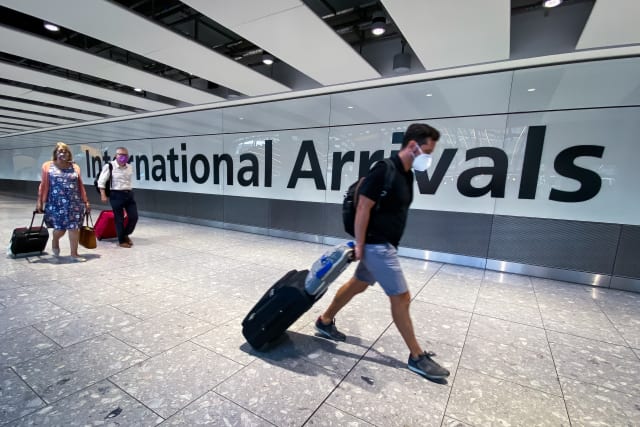 Ministers are under fire from holidaymakers and the travel industry for failing to provide “clarity” after Portugal and Greece retained their places on England’s coronavirus quarantine exemption list.

Wales and Scotland have added restrictions to passengers returning from the summer holiday hotspots, but the UK Government said there would be no change to its list on Thursday.

There had been speculation that Westminster would reimpose the quarantine requirement on Portugal due to a spike in Covid-19 cases, leading many holidaymakers to pay hundreds of pounds to fly home this week.

The Government was also under pressure to reimpose quarantine rules on arrivals from Greece after Scotland and Wales introduced restrictions in recent days.

But Transport Secretary Grant Shapps announced on Thursday evening that there were no changes to the Government’s list, though he said he would not “hesitate to remove countries if needed”.

The Welsh Government then revealed that it is removing the exemption from the 14-day self-isolation requirement for travellers returning from Portugal, Gibraltar and seven Greek islands.

The new rule comes into force at 4am on Friday.

The Scottish Government later said passengers arriving from Portugal would have to quarantine from 4am on Saturday, as well as those arriving from French Polynesia.

Scotland began requiring travellers from anywhere in Greece to enter quarantine from Thursday.

A seven-day rate of 20 is the threshold above which the UK Government has considered triggering quarantine conditions.

Mr Shapps said a number of other factors are taken into account in relation to the list, including the level of change in cases, extent of testing, and whether outbreaks are “contained”.

Industry leaders and holidaymakers criticised the Government, saying travellers are “totally confused” by the different approaches taken in Westminster and the devolved administrations.

Kelly Jones and her family changed their flights home from the Algarve from Saturday to Friday at a cost of £900 to avoid a potential quarantine because she did not want her children to miss out on two weeks of school.

The 45-year-old from Birmingham said the situation was “absolutely disgusting”, telling the PA news agency: “The Government just change the goalposts left, right and centre at the moment. It’s embarrassing.”

Paul Charles, chief executive of travel consultancy The PC Agency, said: “The quarantine policy is in tatters and dividing the United Kingdom.

“Consumers are totally confused by the different approaches and it’s impossible to understand the Government’s own criteria anymore on when to add or remove a country.”

Rory Boland, editor of Which? Travel, said: “Days of speculation around this announcement meant many people rushed to pay extortionate prices for flights back to England to avoid having to quarantine on their return – only to now find out there was no need.

“The Government knows this and yet it continues to offer no clarity around how these decisions are made, all while ignoring the growing evidence suggesting this system is not working.

“If the Government is serious about letting international travel resume while prioritising public health, a major reassessment of its approach is needed.”

It came as figures showed the number of close contacts of people who tested positive for Covid-19 being reached through Test and Trace was at its lowest since the system was launched.

The latest data also indicated that a total of 6,732 new people tested positive for Covid-19 in England in the week to August 26, an increase of 6% in positive cases on the previous week and the highest weekly number since the week to June 3.

Thursday also saw the highest daily total of cases since June 4, with 1,735 positive results in the 24 hours up to 9am.

Meanwhile, the head of England’s testing programme, Baroness Dido Harding, said a “significant” rise in demand for coronavirus testing was behind people being directed to test centres more than 100 miles away.

Some people with Covid-19 symptoms who have tried to book tests online have been directed to centres which would take them more than three hours to reach by car.

She told BBC Radio 4’s PM programme: “Now obviously I don’t want people to be being directed to go miles and miles for a test but the reason that that is happening at the moment is because of a really significant increase in demand off a testing platform that, as I’ve said, is larger than any other in Europe.”