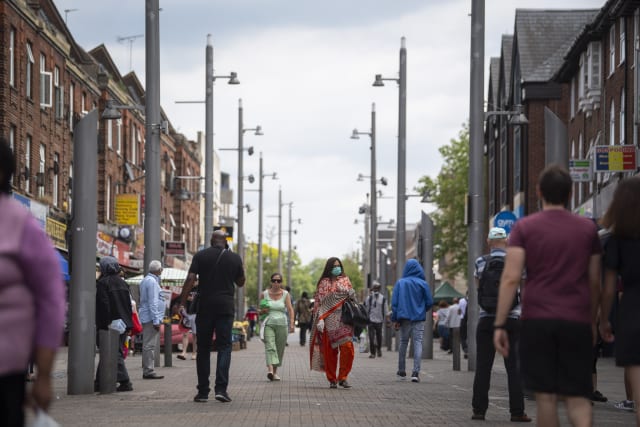 City centre shops have continued to see a slump in footfall in August as vast swathes of people remained working at home, according to new figures.

It said this represented a 7.3% percentage point improvement from July as the rate of recovery slowed.

Footfall on high streets was 41.7% lower for the month, as shoppers stayed away from city centres.

Helen Dickinson, chief executive of the British Retail Consortium (BRC), said: “In-store discounting and demand for school wear helped lure some customers back to the shops, but with many office blocks still empty and much of the public avoiding public transport, footfall is not returning to towns and city centres and this is having a devastating effect on the local economies in these areas.

“While many businesses have been investing in making workplaces safer, we are unlikely to see significant growth in footfall while government advice remains to ‘work from home if you can’.

“Unless this changes, more should be done to encourage people to travel and reassure them that public transport is safe.”

Shopping centres continued to recover in July as footfall slipped 37.4% year on year, representing a 10-percentage point improvement on July.

However, retail parks continued to be the strongest retail area, reporting an 11.1% decline against the same month last year.

The research said shoppers returned to retail parks as they are wider spaces where it is easier to social distance and have a higher proportion of supermarkets.

Andy Sumpter, retail consultant for Europe at ShopperTrak, said: “Footfall in the UK continued to improve throughout August, with a marked upturn in the final week.

“This can in part be attributed to the last days of the Eat Out To Help Out campaign, and back-to-school shopping.

“Retail parks continued to lead the way for recovery, with shopping centres catching up, while high streets are still lagging.

“With many people still working from home, high streets in many major cities desperately await the return of tourist and office commuter footfall.”