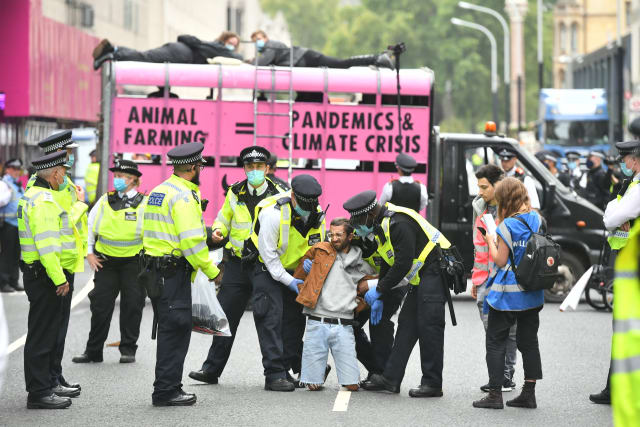 Climate change protesters have glued themselves to the ground around Parliament during a third day of disruption in central London.

Some Extinction Rebellion (XR) supporters said they “jumped the barriers and ran past armed police to glue (themselves) on to the floor outside the House of Lords”.

The tactic, a staple of previous XR protests, was accompanied by scores of others staging a sit-in elsewhere around the perimeter of the parliamentary estate, including at the Carriage Gates.

Supporters have previously sought to go limp or simply look away when police warned them to move on or risk arrest.

A separate protest, carried out by XR ally Animal Rebellion, saw activists locked on top of a pink slaughterhouse truck parked sideways across nearby Victoria Street.

The campaigners said they are demanding “a plant-based food system as a means to mitigate the worst impacts of the climate crisis and reduce the risk of future pandemics”.

They have previously used fake blood in their demonstrations.

Elements of both protests are in contravention of conditions imposed by the Metropolitan Police.

The force confirmed that 72 people had been arrested as of 5pm on Wednesday, the majority for breaching conditions imposed on the Parliament Square demonstration.

It followed 160 arrests made on Tuesday – the first of 10 days of planned action – for offences including breaching public order conditions, obstructing the highway, obstructing police and assault on an emergency worker.